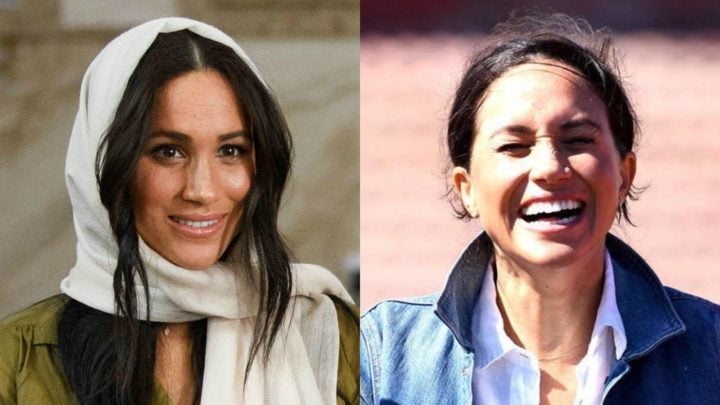 Meghan has only been in South Africa for two days but she’s already completely stolen the spotlight as she continues to delight royal fans on her tour with Prince Harry – even managing to honour her late mother-in-law Princess Diana in a very poignant moment on the second day.

The Duchess of Sussex donned a headscarf as a mark of respect halfway through her day as she visited the country’s first and oldest mosque, the Auwal Mosque in Bo-Kaap, Cape Town. It’s the first time she’s been pictured in public in a headscarf, and follows Princess Diana’s lead – who was seen several times before her tragic death wearing one on royal engagements, including her visit to the Badshahi Mosque in Lahore, Pakistan, in 1991.  The Duchess of Cambridge was also previously pictured wearing one in 2012.

More images from Heritage Day in Bo Kaap. As part of their visit, Their Royal Highnesses visited the Auwal Mosque – the first and oldest Mosque in South Africa. Standing as a symbol of the freedom of former slaves to worship, the Mosque hosts events with Muslim, Christian and Jewish young leaders, and encourages friendship and understanding between South Africa's varied communities. The Duke and Duchess also got to view the first known manuscript of the Qu’ran in Africa, drafted by Tuan Guru from memory, whilst he was imprisoned on Robben Island. ••• Heritage Day celebrated the great diversity of cultures, beliefs and traditions that make up the rainbow nation. Bo Kaap streets filled with colour and music while Their Royal Highnesses were welcomed to one of the most vibrant neighbourhoods in Cape Town. The area has seen inter-community tension rise over the last few years, yet days like today show how faith, traditions, food and music bring people together, and celebrate the things that unite each and every one of us. #RoyalVisitSouthAfrica • Photo ©️ Shutterstock / PA images

Wearing a full-length olive dress for the outing, Meghan looked smitten as she walked hand in hand with Prince Harry before sitting down with a group of people at the mosque and viewing the first known manuscript of the Qu’ran in Africa, drafted by Tuan Guru from memory, whilst he was imprisoned on Robben Island.

The day was set out to honour Heritage Day in South Africa, which according to the couple’s official Instagram page, “celebrates the great diversity of cultures, beliefs and traditions that make up the rainbow nation”.

Meanwhile the duchess showed off her natural beauty in another stand-out outfit at the end of day 2, choosing a long flowing striped dress designed by Melbourne-based Martin Grant that she previously wore while pregnant on a walkabout on Bondi Beach, soon after announcing her happy news in October 2018. Appearing to take inspiration from her sister-in-law Catherine’s thrifty side, Meghan also recycled her blue dress the day before which she previously wore on a visit to Tonga.

Sharing a loving glance with her husband Harry, Meghan flashed a wide smile as the couple arrived at the High Commissioner’s residence in Cape Town for a youth reception in the evening. Their son Archie, four months, remained with his nanny for the evening but he was at the forefront of both of their minds as they both opened up on their son throughout the day.

According to the Mail Online, an anonymous guest said Meghan told them of the flight over to Africa: “They said it was the longest flight they have taken with Archie. She slept with one eye open – but he was very good.”

Elsewhere, retired school principal Shamiela Sanodien and her sister Nazli Edross-Fakier invited the couple for tea and, according to Vanity Fair, Meghan took the opportunity to speak further of baby Archie. “Meghan was so sweet, we spoke about her being on Suits; we told her we adored her in Suits and she was flattered,” Edross-Fakier told the news outlet. “We talked about her being a new mum. She said it was very exciting and she said she’s really enjoying it. The prince said that Archie was a good little boy and slept on Meghan’s chest most of the time. It was wonderful having them for tea.“

More from Heritage Day in Bo Kaap! In amongst the beautiful colour of the Bo Kaap houses, Shamielah Samsodian and her family also opened their doors to the Duke and Duchess, welcoming them into their home to share stories – and importantly – share their food. Happy Heritage Day! ••• Heritage Day celebrated the great diversity of cultures, beliefs and traditions that make up the rainbow nation. Bo Kaap streets filled with colour and music while Their Royal Highnesses were welcomed to one of the most vibrant neighbourhoods in Cape Town. The area has seen inter-community tension rise over the last few years, yet days like today show how faith, traditions, food and music bring people together, and celebrate the things that unite each and every one of us. The Duke and Duchess are so happy to have been invited to the festivities in Bo Kaap today, and were overwhelmed by the amazing welcome. #RoyalVisitSouthAfrica • Video ©️SussexRoyal

Meanwhile, the duchess started her day by ditching her usual glamour and revealing a more laid-back style in a loose denim jacket to join young South Africans and inspiring members of Waves For Change, which sees hundreds of young people from Cape Town’s townships meet every week at Monwabisi beach to surf and talk through the daily challenges they face with mentors.

Day two of #SussexRoyalTour is underway, and The Duke and Duchess have joined young South Africans and @WavesForChange to focus on mental health and take part in ‘surf therapy’. • Hundreds of young people from Cape Town’s townships meet every week at Monwabisi beach to surf, but also share stories with mentors and talk through the daily challenges they face. Their Royal Highnesses were able to hear how the sessions are building trust, confidence, and belonging, and they also got to join in as children took part in ‘power hand’, which teaches them how to keep calm down reflect on strengths. While on the beach The Duke and Duchess met @TheLunchBoxFund – which was one of the charities they nominated to benefit from donations following the birth of their son, Archie. Almost 30,000 meals are provided by the charity every day across South Africa, including for three @WavesForChange projects. And before they left The Duke and Duchess joined the Commonwealth Litter Programme (CLiP) – which was teaching the surfers about the impact of plastic waste on the ocean. #RoyalVisitSouthAfrica • Photo ©️ photos EMPICS / PA images / SussexRoyal

Royal fans have showered her with praise on Instagram for her natural beauty and beaming smile for everyone she’s meeting in the country. One commented on social media: “She reminds me of Princess Diana. I see why Harry chose her as his mate,” while another added: “She is seriously so gorgeous.”

Meanwhile one person wrote: “Loving how they get right in with the locals… Love, Love, Love,” while one added: “Now this is a princess!” and one wrote: “How beautiful, colourful and so many happy smiles.”

Are you following Harry and Meghan's Africa tour?