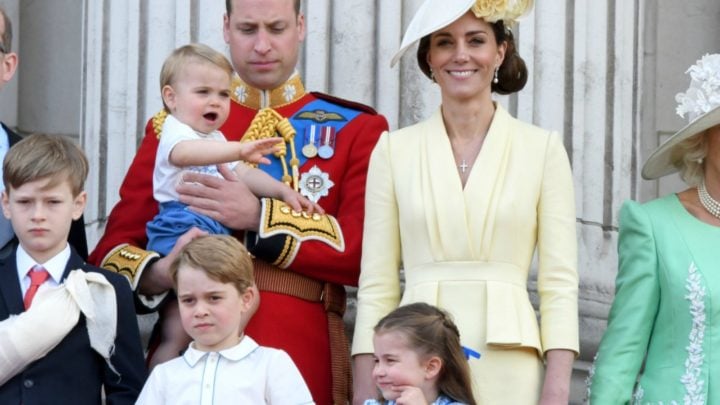 The Duke and Duchess of Cambridge shared an adorable video online of Prince George, Princess Charlotte and Prince Louis laughing and clapping together outside their home in Norfolk as they took part in the Clap for our Carers campaign.

The young royals joined the nation on Thursday night in thanking the nurses, doctors, emergency services, and all those helping those affected by the coronavirus pandemic.

“To all the doctors, nurses, carers, GPs, pharmacists, volunteers and other NHS staff working tirelessly to help those affected by #COVID19: thank you,” the caption reads.

To all the doctors, nurses, carers, GPs, pharmacists, volunteers and other NHS staff working tirelessly to help those affected by #COVID19: thank you. #ClapForOurCarers #ClapForCarers #ThankYouNHS #ClapForNHS

Royal fans gushed over the video, with one commenting: “Oh my goodness! This. Is. Just. Perfect.” Another added: “This is just so sweet! William and Kate are raising them right!!”

While a third wrote: “Awww how lovely! Well done little ones.”

George, six, Charlotte, four and Louis, one, weren’t the only royals to show their support. The official royal family’s social accounts shared a video of Prince Edward and Sophie clapping alongside their children Lady Louise Windsor, 16, and James Viscount Severn, 12 , outside of their Windsor residence.

“The Earl and Countess of Wessex, and their children, show their support for all those working on the frontline,” the royal family captioned the video.

“We are enormously thankful for the expertise and commitment of our scientists, medical practitioners, and emergency and public services,” Her Majesty The Queen also added.

The Earl and Countess of Wessex, and their children, show their support for all those working on the frontline. #clapforourcarers 👏👏👏 #ThankYouNHS . “We are enormously thankful for the expertise and commitment of our scientists, medical practitioners and emergency and public services” – Her Majesty The Queen. Swipe ⬅️ to see photos of The Queen meeting NHS workers on previous visits.

Meanwhile, Clarence House posted a video on their story of Prince Charles, who tested positive for the virus earlier this week, and Camilla clapping from separate rooms as they self-isolate within their Scottish home in Birkhall.

The BBC reported on Wednesday that Charles, 71, had mild symptoms but was otherwise “in good health”, citing a spokesman for the prince’s residence, Clarence House. The same report said that the Duchess of Cornwall had also been tested for Covid-19 but did not have the virus.

Sky News in the UK reported that the Prince, who had been self-isolating with wife Camilla in Scotland, had been working for the past few days as usual. The tests were carried out by Britain’s National Health Service after the couple met the criteria required for testing.

The royal couple, both in their 70s, postponed their upcoming royal tour of Bosnia, Herzegovina, Cyprus, and Jordan in order to spend time at the Balmoral estate in Scotland amid the coronavirus outbreak. They had not set a date to return to their London home.