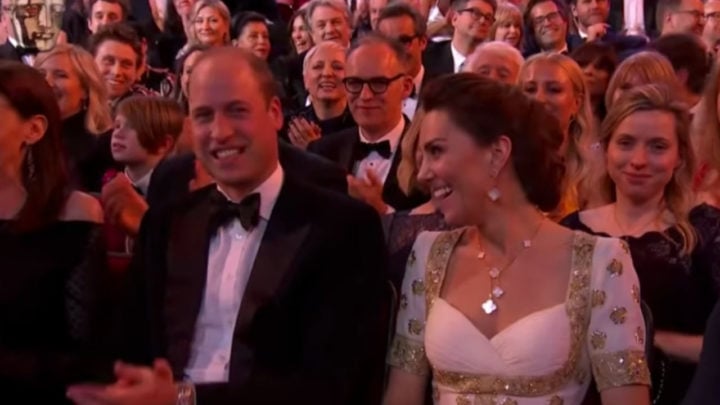 The Duke and Duchess of Cambridge were seen laughing as Margot Robbie read out Brad Pitt's acceptance speech. Source: Getty.

The Duke and Duchess of Cambridge were the centre of attention on Sunday evening as they stepped out to attend the 73rd annual BAFTA Awards in London.

However it wasn’t just their glamorous turn on the red carpet that garnered so much attention, as all eyes were firmly fixed on the royal couple during the ceremony after an awkward joke was cracked about the recent ‘Megxit’ drama surrounding the royal family.

Australian actress Margot Robbie stepped onto the stage to accept her Once Upon A Time… In Hollywood co-star Brad Pitt’s award, after the Troy star was forced to miss the star-studded bash due to “family obligations”.

Margot then read out the actor’s acceptance speech on his behalf, which featured the usual praise for his colleagues, including the movie’s director Quentin Tarantino. However the speech ended with a rather unexpected quip towards Prince Harry and Meghan’s recent move to the other side of the Atlantic.

“He says that he is going to name this Harry because he is really excited about bringing it back to the States with him,” Margot said. And as the crowd audibly gasped and laughed at the reference, the Wolf of Wall Street star added: “His words, not mine! Thanks!”

People were quick to discuss the stunt on social media and while the majority of people praised Catherine and William for their poise, others criticised Brad Pitt for making light of the situation. One person commented: “Wills and Kate laughed at that one, too! Good sports.”

Another commented: “William and Catherine’s laughter is so genuine and silly. They obviously love Harry so much and are happy for him.” However another viewer wrote: “Rude and insensitive.”

Catherine looked incredible for the outing on Sunday as she opted to recycle a stunning white and gold frock by British fashion house Alexander McQueen – who were also responsible for her iconic 2011 wedding gown. The duchess previously wore the gown for a state dinner in Malaysia during the Cambridge’s diamond jubilee tour in 2012.

Sticking with the golden theme, Catherine completed the look with a pair of glittering stiletto heels and a matching clutch bag. While her earrings and necklace perfectly complimented the floral-inspired embroidery on her gown.

Do you think the joke was intended in good spirits? Or do you think it was disrespectful of Brad Pitt to bring up the recent royal drama?