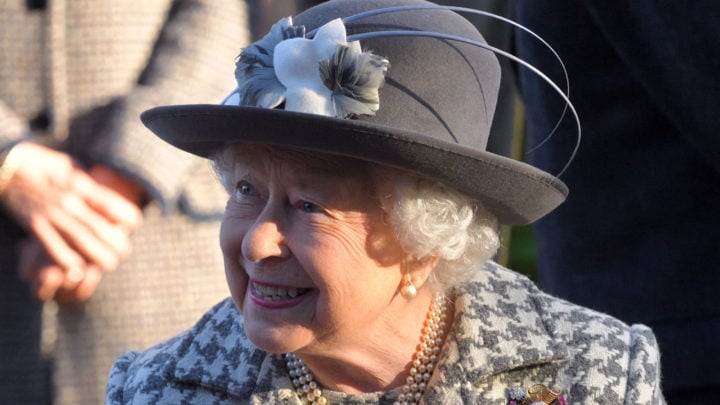 The Queen stepped out to attend church on Sunday. Source: Getty.

It’s been a tumultuous few weeks for the British royal family, following the bombshell announcement by the Duke and Duchess of Sussex that they wished to “take a step back” less than a fortnight ago, but Her Majesty the Queen looked as unflappable as ever on Sunday as she attended church in Sandringham.

The monarch stepped out just hours after the details of her deal with Prince Harry and Meghan were made public, and the 93-year-old was pictured smiling widely as she was joined by her son Prince Andrew at St Mary the Virgin church in Hillington.

As she arrived at the church with the Duke of York, who also stepped down from his royal duties at the end of last year following a backlash over his relationship with the late Jeffrey Epstein, the Queen showed no signs of the recent family tensions as she greeted well-wishers, appearing delighted to do so.

The details of Harry and Meghan’s exit from royal life were confirmed in a statement released by Buckingham Palace on Saturday evening (UK time), which revealed that the couple world forego their HRH titles and public funds, in a bid to establish a more peaceful life for themselves and their son Archie.

Following a backlash from the British public, the couple also agreed to pay back the £2.4 million (AU$4.6 million) of public funds that was spent on refurbishing their UK home Frogmore Cottage, which they will keep as part of the deal.

The only aspect of the deal that has not yet been clarified is the couple’s security arrangement, as the palace added: “Buckingham Palace does not comment on the details of security arrangements. There are well established independent processes to determine the need for publicly-funded security.”

Just hours after the Queen was pictured at church, Prince Harry also stepped out for the first time since news of the deal broke. Harry, Duke of York, as he will now be styled, stepped out in London last night to attend a private fundraiser at The Ivy Chelsea Garden in aid of his charity Sentebale, which he founded in 2006 alongside Prince Seeiso of Lesotho.

Harry openly addressed his decision to step away from his official duties and establish a more peaceful life for himself and his wife and son in North America, telling the crowd at the event that “there was really no other option”, before stressing that the move was not them “walking away”.

“I want you to hear the truth from me, as much as I can share – not as a Prince, or a Duke, but as Harry, the same person that many of you have watched grow up over the last 35 years – but with a clearer perspective,” he said, according to Hello! magazine, who shared the full transcript of Harry’s speech online.