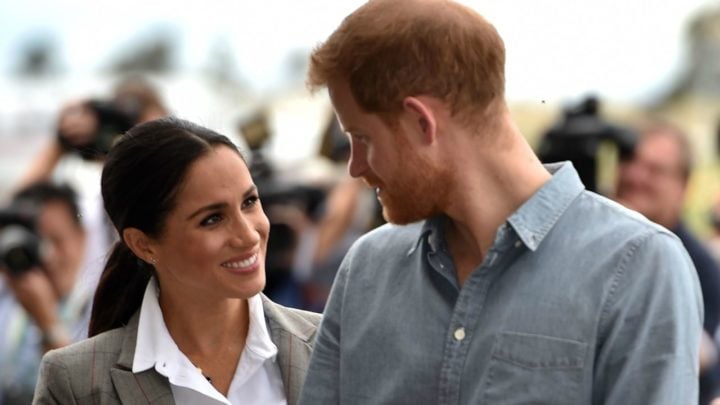 Harry and Meghan's neighbours have been reportedly advised on how to act. Source: Getty

They’ve been at the wrong end of public criticism over recent months and it’s now even been claimed Harry and Meghan’s neighbours have been  advised on how to act, should they see the royal couple around their newly-renovated Frogmore Cottage.

According to a report in The Sun, those living close to the Duke and Duchess of Sussex were ordered at a residents’ meeting not to talk to the new parents, ask to see baby Archie or even stroke their dogs should they bound over.

However, a spokesperson for Buckingham Palace told the publication the request had come from an  “overly protective palace official” and Harry and Meghan had no involvement in the briefing.

Royal commentator Ingrid Seward has since commented on the issue, claiming it sounds as if the couple’s constant demands for privacy has confused palace officials, adding: [They] are second-guessing what they might want.”

“It’s odd because it’s just good manners to engage your neighbour in conversation in a pleasant way. It’s a very normal British thing to say ‘Good Morning’ and pat a dog,” she said, according to the publication.

“The Queen always chats to neighbours and even has tea with people on the estate as she’s very friendly with them. The ‘not petting the dog’ is particularly strange.

Harry and Meghan have been criticised in the past for keeping details of son Archie’s birth and christening private.

In fact, royal author Penny Juror recently criticised the couple’s decision to keep the christening ceremony private, saying “they can’t have it both ways”.

“Either they are totally private, pay for their own house and disappear out of view or play the game the way it is played,” she told The Times.

Meanwhile, it comes after the duchess faced backlash earlier this month after a report from The Daily Telegraph claimed that Meghan’s staff asked people not to take photos of her at Wimbledon because she was there in “a private capacity”.