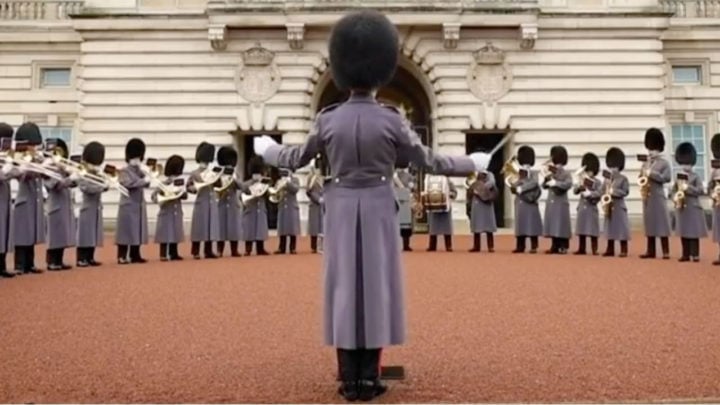 Fans gathered at Buckingham Palace on Friday were treated to a Bon Jovi medley during changing of the Guard. Source: Instagram/Royal Family.

The Queen gave a sweet nod to her grandson Prince Harry this week, as ‘Livin’ On A Prayer’ rang out from the grounds of Buckingham Palace.

The hit Bon Jovi song was chosen for the military ceremony in honour of the Duke of Sussex’s latest project which has seen him team up with the ‘It’s My Life’ crooner.

Harry and Jon Bon Jovi came together to record a brand new record, titled ‘Unbroken’ in support of the Invictus Games, which the prince launched back in 2014 to support wounded, injured or sick military personnel from around the world.

On Friday, the band of The Queen’s Guard showed off their incredible talent in a video shared on the official Royal Family Instagram account, alongside a caption which read: “Changing of the Guard at Buckingham Palace!”

💂‍♂️🎺 Changing of the Guard at Buckingham Palace! During each ceremony The Queen’s Guard hands over responsibility for protecting Buckingham Palace and St James’s Palace to the New Guard. Today the band played a special medley of @bonjovi music to celebrate his collaboration with the @weareinvictusgames.

The post continued: “During each ceremony The Queen’s Guard hands over responsibility for protecting Buckingham Palace and St James’s Palace to the New Guard.

“Today the band played a special medley of @bonjovi music to celebrate his collaboration with the @weareinvictusgames.”

It’s not the first time that one of the royal military band’s have taken on a pop classic for Changing of the Guard though, as in July 2018 the band of the Royal Logistics Corp played ABBA hit ‘Dancing Queen’ in honour of the release of Mamma Mia: Here We Go Again!

Can you guess this tune? #FridayFeeling

Beautiful played by @TheRLCBand during Changing the Guard at #BuckinghamPalace pic.twitter.com/u43Rex1mdb

The legendary track is said to be the monarch’s favourite song by the Swedish foursome and, in videos shared online, crowds of royal fans could be seen peering through the iron gates of the palace to get a closer look at the special performance.

And last year, the band opted to honour English rockers Queen and their recent Golden Globes Best Picture win for the movie Bohemian Rhapsody, by playing the title track for delighted fans who had gathered to watch the ceremony, which takes place at 11am daily.

Footage of the performance was captured by a number of tourists and shared online, showing the Queen’s Royal Guards belting out an instrumental version of the popular track, as people in the crowd can be heard singing along.

Have you ever watched Changing of the Guard?