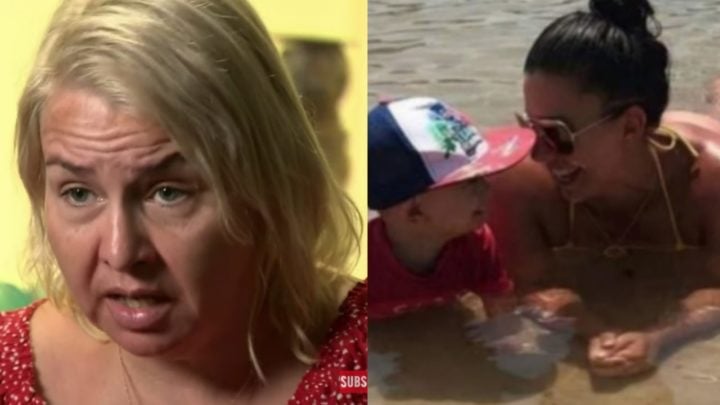 The cousin of Rowan Baxter has spoken out about her relative and his threatening behaviour towards Hannah Clarke. Source: YouTube/ Nine News Australia and Facebook

The cousin of Brisbane man Rowan Baxter, who allegedly deliberately lit his ex-wife Hannah Clarke and their three children alight in a horrific car fire, has spoken out for the first time, revealing the extent of his controlling and violent nature.

Hannah, 31, tragically passed away on Wednesday evening after sustaining severe injuries in the fire, while her three children Aaliyah, six, Laianah, four, and Trey, three, were also killed. Baxter also died at the scene, reportedly due to self-inflicted injuries.

While Hannah’s family bravely spoke out earlier in the week about the months and days leading up to the tragic deaths, Baxter’s family have remained relatively quiet, until now. In an exclusive interview with Nine News, Baxter’s cousin Sandra Taylor, has revealed his dark history of violence and her decision to cut ties with the man for fear of her own safety.

Sandra told Nine News she had been estranged from Baxter, however, had reached out to Hannah when she was brave enough to leave.

“It was just fear, complete fear,” she said. “The moment I reached out to Hannah, there was just all this dog faeces, I’ve never had a stray dog on my property. He was continually walking past my store at the shopping centre, the same one where Hannah works, worked.”

Although Sandra admitted the tragic events that unfolded last week may have shocked the wider the community, for her it wasn’t a surprise. She said Baxter had displayed threatening behaviour in the past.

“For everybody else, they’re shocked, I’m not,” she told Nine News. “One time Hannah had come to the car and he was letting Trey play with all of the photos of his mother cut up. So very, very threatening that Hannah’s life was coming to an end.”

Now, just like Hannah’s family, Sandra is calling for further awareness of domestic violence to ensure no other women end up in the same situation as the mother-of-three.

“We need an overhaul of the mental health, and men’s mental health,” she said. “And it’s got to start I think, even from day care.”

Sandra’s comments come just days after Hannah’s mother, father and brother gave an emotional TV interview, where they revealed she had feared for her life in the weeks leading up to her death. Speaking in an exclusive interview with Nine’s A Current Affair, Hannah’s parents Lloyd and Suzanne Clarke, and brother Nathaniel gave a rare insight into the months and days before the tragic day.

Asked whether they were concerned about their daughter’s life, Suzanne said: “I didn’t think he’d hurt the kids. She was concerned he would kill her. I believed that could be possible.”

She went on to reveal that only last week Hannah had shared her fears for her life. “She said to me ‘Mum should I do a will? What happens to my babies if he kills me?’.

Her mother added that Baxter’s behaviour grew worse as Hannah was preparing to leave him.

“While he felt he was still in control of the situation it was all not physically as dangerous,” she said. “But we knew there was no way she could say ‘I’m going’ and walk out the door.”