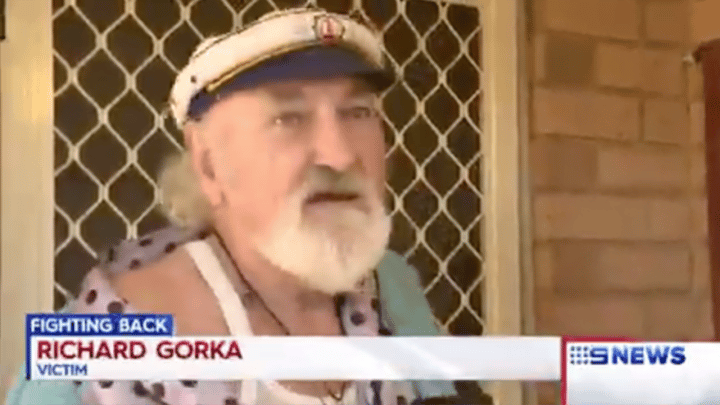 Richard Gorka fought off his attackers when they kicked in his door and forced themselves into his home in Adelaide. Source: Twitter/ Nine News Adelaide

A grandfather has become the latest Baby Boomer to be targeted in a string of crimes across the country the past few months, showing his courage and strength as he attempted to fight off two intruders at his home in Adelaide.

Richard Gorka did not want to go down without a fight when the masked men forced their way into his house on Rotorua Avenue in South Australia’s capital recently, grabbing whatever he had nearby to get them away from himself and his property.

Speaking to Nine News about the frightening ordeal, the 69-year-old said they kicked down his front door and proceeded to grab nearby items to hit and get him out their way. But Richard explained he was well prepared with a weapon close by.

Two intruders have got more than they bargained for when they stormed the home of a Park Holme grandfather. @NatarjshaKramer #9News pic.twitter.com/eYYWeY8Wbv

“They armed themselves with a stool and they were breaking in so they kicked the front door in and I was backwards – luckily I had a machete there,” he told Nine News. However, the intruders were strong and used pool cues to bash the grandfather before fleeing in a car waiting outside.

It was 1.45am when the incident occurred and neighbours explained they heard Richard’s screams for help from their own homes. “Heard a lot of kicking, thumping, they were kicking his door in and I heard him screaming, crying,” Samuel Whennan told Nine News. “When I went out there the Commodore had just screamed around the corner.”

Richard was thankfully taken to hospital and stayed there over night recovering from the ordeal. He told Nine News he suspects they were trying to steal his medication, with his dog and bike stolen recently.

“They’re scumbags – they go around pinching bicycles and robbing old people, that’s all their doing,” Richard said. Shockingly there have been a number of attacks on Baby Boomers and the elderly recently with an 81-year-old grandad targeted just days ago in a terrifying two hour gun heist.

Barry Lathwell was heading home after work when he was targeted in an attack near his home in the Western Australian capital. The grandad had just shut up shop when he was kidnapped and held hostage by two hooded men who threatened to kill him if he didn’t follow their orders.

The men had been waiting for him outside his Beckenham gun store and once he left followed him in a white Mercedes van on his drive home, Nine News reports. Following a detailed plan, they then staged an accident at a set of lights before striking Barry and kidnapping him.

“They put silver handcuffs on me, they cable tied my legs together and they got a dirty old cloth. They put it around my head and duck taped it so I couldn’t see,” the grandfather told Nine News. Once Barry was inside their van the men drove to the grandfather’s store and demanded he tell them the code to get inside and steal the guns.

Throughout the frightening ordeal the men managed to steal a total of 100 guns from the store and an additional 30 long-arm firearms. Barry was hit with an iron bar on the legs, resulting in multiple bruises and explained he didn’t think he was going to make it out alive.

“They said, ‘we are going to kill you and do you unless you give us the access codes to get into your shop’,” Barry told Nine News. “I thought, I’m gone, I’m done.”

However, despite his injuries and fright, the grandad proved you’re never too old to fight back, using his quick thinking to lock the men outside the store and sound a duress alarm to get help. “I thought they would come back and get more guns and do me in – that’s what I thought,” Barry explained.

Have you been following this story? Have you or a loved one ever had to fight off an intruder?