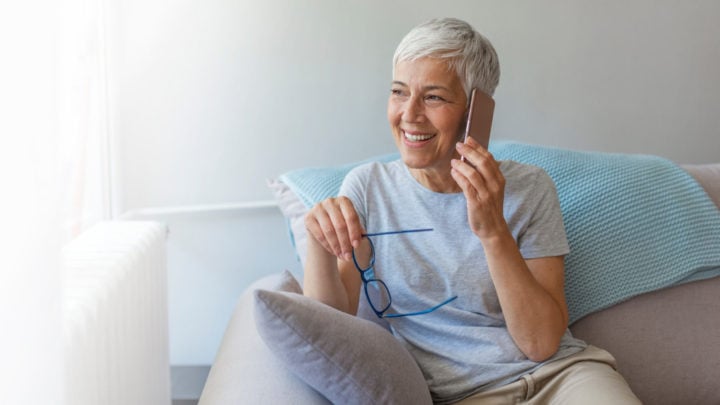 The majority of Aussies said they can see the positives that have emerged amid the coronavirus outbreak. Source: Getty

Older Aussies are remaining positive about the future despite Covid-19 restrictions and challenges, with new research revealing the majority of over-60s can see the silver lining amid the pandemic.

While self-isolation and social distancing measures have caused some distress throughout the country, a national survey has found more than half of Aussie seniors (51 per cent) believe some positive changes have emerged from the outbreak. In fact, the study, conducted by the Global Centre for Modern Ageing, found 19 per cent of those aged over 60 believe that social cohesion and wellbeing are likely positive outcomes from the coronavirus in Australia. Study participants also said they felt community spirit had improved and people were increasingly keeping in touch with others and being more neighbourly.

Despite being at higher risk of contracting the coronavirus, the research also revealed over-60s are less concerned with the potential impacts of the outbreak than younger generations, scoring 46 and 52 per cent respectively.

“Interestingly, introspection was commonly cited as a positive,” Julianne Parkinson, chief executive of Global Centre for Modern Ageing said. “Older Australians reported there’s an increased appreciation for what we have and that more people have been evaluating what’s important.”

Meanwhile, 80 per cent of older Australians surveyed were also able to provide examples of support they had received from others. With face-to-face contact a no-go at the moment, it seems more are turning to technology to support friends and family. In fact, the study revealed 21 per cent of older Aussies have used a new technology for the first time during the pandemic, while 29 per cent have increased their use of social media to stay connected.

But the use of technology isn’t a completely new concept for over-60s. A recent Digital Paradox for Seniors report found that older Australians beat many other demographics in their enthusiasm to embrace technology. In fact, the only thing holding back older people from doing more with technology was the lack of opportunity to lean.

“When they are introduced to the technology, they’re curious and engaged,” Richard Scenna, co-founder of study sponsor YourLink, said of the 600 seniors surveyed for the report. “They are also frustrated by the assumptions made about them and their readiness, or lack of, to participate.

“The research shows that over 80 per cent of respondents rely on friends and family [to teach them]. This support is often unavailable because of the time or distance and when [family members] are available, they are focused on ‘fixing’ not teaching. This doesn’t nurture the digital independence seniors value.”

Do you think any positives have come from the Covid-19 outbreak? How are you coping amid the pandemic?