‘Strike me pink’: Ray Hadley in tears after surprise visit from baby grandson 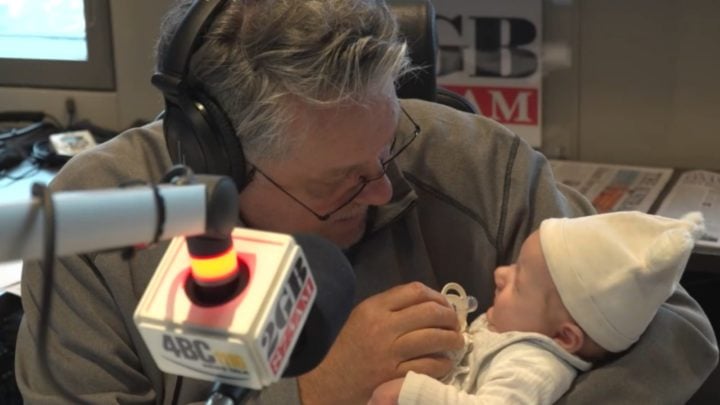 Ray Hadley was live on-air when his new baby grandson Noah was brought into the studio on Friday morning. Source: Facebook - 2GB

Ray Hadley was brought to tears on Friday morning after his son Daniel and his partner Cass surprised him at the studio with a very special visitor.

The 2GB radio host was live on-air when his new baby grandson Noah, who was welcomed into the world earlier this year, was carried into the studio.

Taken by complete surprise, Ray can be heard saying in a video, uploaded to the talk show’s Facebook page: “What’s this all about… my little grandson!”

He continues: “I got my little grandson Noah here ladies and gentleman, he just surprised me.”

In the sweet video, Ray is then seen cradling the adorable 10-week-old little bub.

“Hello buddy, hello little fella,” he can be heard saying to his grandson. “Look at you, you little darling boy. Gee it’s good to see you.”

Many fans of the show were quick to comment on the sweet video, with one writing: “Aww… god bless you and your family Ray.”

Another added: “Lovely surprise for you Ray.”

While a third wrote: “That so lovely  it just reminds me of dad every time he see his granddaughter.”

“Lovely, we know you are a real family man Ray, what a little beauty Noah is,” another commentator wrote.

It’s been a difficult week for the grandfather-of-two after he revealed in an emotional statement on Thursday how a former colleague who previously accused him of bullying is taking him to court.

Former panel operator at 2GB, Chris Bowen, shared an open Facebook message several months ago claiming he had suffered years of mental health problems following the deaths of his parents, as well as years of “inexcusable behaviour” and “out of control sheer rage” directed at him at the radio station.

While he didn’t initially name Ray in the post, simply saying “you don’t need to be Sherlock Holmes to work it out”, he has since confirmed to several news outlets that it was about the radio host.

Ray told listeners on Thursday morning he was “particularly sad and concerned” the former colleague has decided to pursue legal action.

“We became very close in the years that we worked together, probably more like a father and son, and like many close relationships, it could be volatile,” he said.

“But I felt that we always got through our ups and downs and had plenty of good times, and I was proud when he asked me to MC his wedding and touched by the comments he made about me and our relationship.”

“I’m particularly sad and concerned that it has now come to a legal action, which is now in the hands of my legal advisers.”

Are you a fan of Ray Hadley? Do you have any grandchildren?