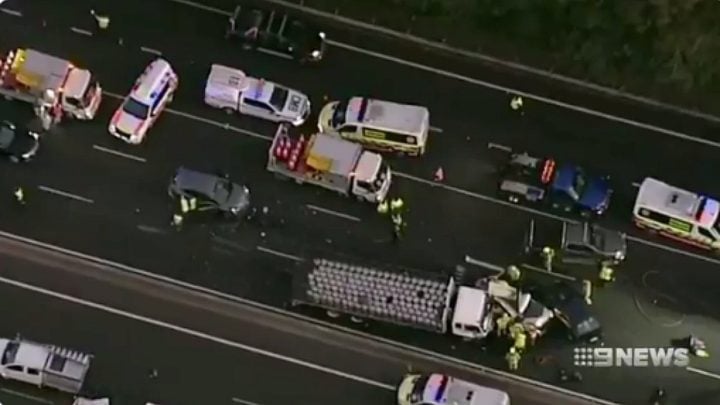 One man was killed in a crash on a Sydney motorway on Thursday. Source: Twitter/ Nine News Sydney

Radio host Ray Hadley has sent a stern warning to the driver of a vehicle involved in a fatal crash in Sydney this week, urging them to come forward immediately.

Speaking on 2GB on Friday morning, the 64-year-old claimed now is the time for the person in question to speak up and provide some insight into the accident, which led to the death of one man.

In the early hours of Thursday morning, a total of 11 vehicles were involved in a crash on the M4, police have confirmed, however only 10 stopped following the incident. Sadly a 36-year-old man died at the scene, while a further five were taken to hospital with various injuries.

Shortly after the accident New South Wales Police sent a message to the public calling for the 11th driver to speak up and share any details which could clarify the circumstances following the incident.

A split-second decision to avoid paying a motorway toll could be the catalyst for a deadly crash that brought Sydney's west to a standstill. A young tradie was killed when ten vehicles piled-up on the M4 this morning, triggering a 15-kilometre traffic jam. @mr_timdavies #9News pic.twitter.com/uFq9Zmwlt6

While investigators have not suggested the driver caused the crash, Hadley has insisted they must come forward.

“I can assure you that the poor fella that died, the truck driver that hit him and a number of other motorists that were caught up in it were not at fault,” he claimed to listeners on his radio show.

“The fault lies with a driver of a small sedan who tried to squeeze into the M4 exit at Church Street and basically came to a stop at the main carriage of the M4. Having caused the carnage with quite a number of cars either avoiding that car and crashing into each other and then this poor 36-year-old into the path of the truck, the driver of this small sedan simply proceeded down the road along the M4 as if nothing happened.”

Hadley went on to claim that while some may argue that the driver was unaware of the accident at the time, with the multiple media reports on the accident they would know now. He urged the driver to speak to police promptly, adding that officers will find them sooner or later.

“So before they come knocking on your door at work or at home, it would be in your best interest to present yourself to the nearest police station.”

He added: “A stack of lives were impacted yesterday by the sheer stupidity of a person trying to push in. A man is dead.”

Police have not confirmed who was at fault yet.

While investigations continue into the cause of the crash, family and friends of Francis, who was tragically killed, have begun to mourn the loss of the man.

His fiancee Broc Nicholson posted a heartbreaking message on Facebook following the accident, paying tribute to the man she was reportedly meant to marry next year.

“Most of you have heard the devastating news of our beautiful, strong head, lucky charm Irish boy Francis Stanley has passed way [sic] today,” she wrote alongside a series of photos of him.

“He will be forever in our hearts and sadly missed. I thank you all for you love, support and messages of kind words. Going to be a long road ahead getting back on our feet.

She added: “Please understand that if i do not respond straight way. But will shortly get back to you. Fly high my beautiful angle [sic] I love you forever and always.”

Have you been following this story? What are your thoughts on what Ray Hadley said?