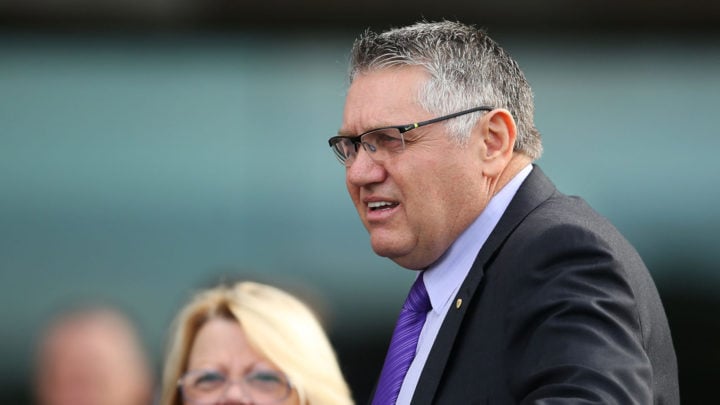 Ray Hadley was forced to step away from the broadcasting desk on Monday amid a medical emergency. Source: Getty

Radio announcer Ray Hadley has been forced to step away from the radio desk and head to the doctor as he suffered a medical emergency while on air.

The 2GB host stopped his broadcasting of daily news mid-way through on Monday morning to explain to listeners that he had to say goodbye for the day due to an ongoing medical condition. Hadley said he had been suffering for some time and needed to get to the doctor immediately to ensure he was in safe hands.

“I’ve been battling a problem since last night,” he explained while live on air. “It’s a problem I encounter every couple of years. It’s called diverticulitis. I’m about to have, I think, an attack, and the only thing I can do is get to my GP, talk to him and get something done about it.”

The radio station confirmed that Hadley is now in hospital where he is receiving treatment for diverticulitis – a condition which sees small pockets called diverticula appearing in the wall of the bowel. People with the condition can experience a range of symptoms including abdominal pain, fever, nausea and a change in bowel habits.

Taking some time to rest is one form of alleviating the symptoms, along with a low-fibre diet and antibiotics. However, in more severe cases time in hospital is required and even surgery.

The concerning emergency comes months after Hadley revealed he was forced to spend a weekend in hospital hooked up to a drip after falling ill with the condition with no warning signs whatsoever. The 64-year-old rang to update his fellow presenters Mark Levy, Bob Fulton, Darryl Brohman and Erin Molan from his hospital bed revealing he suffers from diverticulitis.

“It’s a rotten sort of thing… and there’s no cure,” he explained on air. Ray said he began feeling unwell on the Friday, having felt “on top of the world” just minutes beforehand – and luckily he knew straight away that he needed to get to hospital.

“Most people out there who suffer with it like I do will know exactly what I’m talking about,” he said. “It’s in the bowel and strikes you within minutes, and I got an attack last night and ended up on a drip here in hospital.”

He went on: “Yesterday I was on top of the world feeling really good, and about 10 minutes later I hit the deck… with a whole range of stomach pains and things like that. Then you recover from the original attack and what happens is, when I had it last time two years ago, I just thought I had bad gastric flu. I thought I was okay, stayed home for two days off work, and then eventually went into hospital because the infection took hold.”

Hadley continued by expressing his shock at how quickly the news can spread online, despite him not telling anyone that he’d been admitted himself. Instead, fellow patients had posted updates themselves and the news had quickly spread.

“I hadn’t been in hospital emergency more than 10 minutes when I started getting text messages from Phil ‘Buzz’ Rothfield asking ‘Are you ok?’,” Ray told his colleagues, and it had happened before he’d even had chance to tell his own children.“Despite the immediate interest in my time in hospital, I didn’t tell my children,” he added, explaining that each of them had their own concerns to be worrying about, so he didn’t want to trouble them. However, when his fellow presenters offered to send him flowers, Ray joked that he just needed a change of underwear.

In fact, he didn’t tell his partner either as he was worried about spoiling her weekend away. However, he was inundated with messages from his daughter as she finally found out the news.

Do you have a message of support for Ray Hadley during this difficult time? Do you know anyone who suffers from diverticulitis?