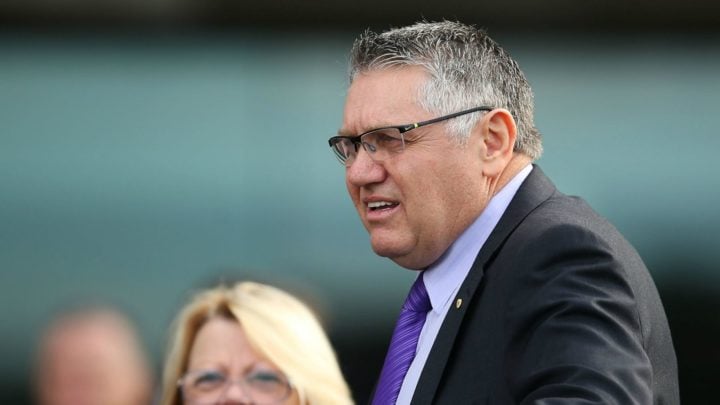 Radio broadcaster Ray Hadley has called on the government to take action after five police officers were attacked in a matter of hours across Australia. Source: Getty

Radio presenter Ray Hadley has vented his frustration over the spate of assaults against police officers this week, claiming he’s had “a gutful” of the abuse towards emergency services personnel.

In just 24 hours a total of five police officers were attacked while on duty across Australia, including a 24-year-old constable who was stabbed in the neck with a makeshift spear and a senior constable who was allegedly punched in the face by a teenage girl.

Speaking out about the shocking incidents during his segment on 2GB, the broadcaster said “enough is enough” and people need to show more respect to those that serve the community.

“These people like this young copper are there to serve and protect the community and the way they’re treated is just totally and utterly unacceptable by anyone’s standards,” he insisted on air.

Hadley called on the government to step up and take action against the perpetrators who are harming emergency services workers and said the time has come to make changes. The 64-year-old questioned what is being done to protect these people and what sort of punishment should be enforced on the attackers.

“It appears to me society, led by the courts, are now immune to these sorts of cowardly attacks,” he continued. “I make this point all the time, if this sort of attack occurred in a magistrates court would the magistrate share the leniency to the perpetrator as he or she shows to people who attack police officers, ambulance paramedics, firies, hospital staff? I don’t think so.

“There needs to be some leadership here from the premiers in these states [that the attacks occurred] to simply say there is zero tolerance to these matters.”

Hadley added: “The governments in both states need to say enough is enough.”

The radio broadcaster went on to explain how he supports the police force and asked the Australian community to take a stand against the horrible abuse.

“Cut the bulls**t PC and come into the real world. Start thinking about your fellow officers who are getting the crap kicked out of them.”

Hadley ended with a bold statement claiming: “I’ve had a gutful and I think society should as well.”

What do you think needs to be done to protect emergency services personnel? Do you believe there should be stricter punishments against those who harm them?