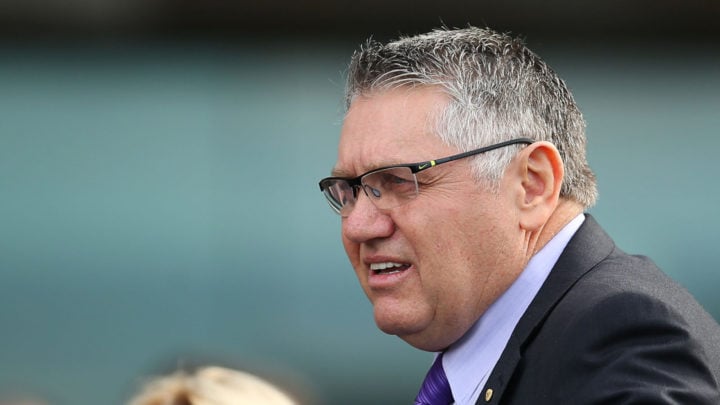 Ray Hadley has been accused by further former colleagues of bullying. Source: Getty

Radio presenter Ray Hadley is facing further bullying accusations from former colleagues, according to the ABC, just days after he was forced to apologise to a former staff member and friend on air.

The 64-year-old spoke out last week after former 2GB radio producer Chris Bowen accused him of “intense bullying” over 16 years in a lengthy social media post.

In an open message shared on Facebook, Bowen claimed he had suffered years of mental health problems following the deaths of his parents, as well as years of “inexcusable behaviour” and “out of control sheer rage” directed at him at the radio station.

Hadley later responded to the claims on his 2GB radio show, revealing the pair once shared a close bond – similar to that shared by “father and son” – and he even acted as master of ceremonies at Bowen’s wedding. He went on to apologise for any hurt he may have caused Bowen, and said he’d love to make amends with him in the future.

However, only days later, the ABC has now reported that Bowen wasn’t the only one bullied by Hadley over the years. According to the national broadcaster, a number of former colleagues of the radio presenter have also spoken out about their experiences to 7.30 in an episode due to air on Wednesday night.

ABC Grandstand presenter Andrew Moore, who has known Hadley for 35 years, is one of a few who were allegedly bullied by him.

The commentator will reportedly claim during the episode that he first saw Hadley’s rage as a teenager during work experience when the presenter allegedly ripped a tape machine out and threw it against a wall.

According to Moore he witnessed this temper again years down the track when working as rugby league commentator at 2GB. While Moore regarded Hadley as “a very hardworking broadcaster”, he claimed that there is a fiery side to the presenter.

“As a human being, I think he’s a bully. I think he thrives on intimidation … yelling and screaming,” ABC reports he told 7.30. The bullying apparently reached the level where it affected his mental health and Moore had to seek help from a psychologist.

“I hated going to work. And I hate feeling so weak,” he reportedly added.

According to Moore he complained to 2GB management about Hadley’s behaviour but was ignored. However, when contacted by the show, Hadley reportedly told 7.30 he “did not recall the incidents”.

Moore wasn’t alone in his claims, with former 2GB staff member Jesse Perez also speaking to 7.30 about his experience working with Hadley and the bullying allegedly taking place at the time.

Perez said Hadley expressed a “ferocious amount of rage” towards him in a “furious diatribe” about one of his articles. The tirade was apparently that bad that Perez said he was left in a state of panic and nearly vomited. Perez claimed he too reported the incident to management but nothing happened.

Hadley has since reportedly addressed the allegations on air, saying: “I took responsibility for my former behaviour, which has been well-documented. I gave my word in 2013 to my fellow staff members, the sort of culture I grew up in would no longer be the standard.”

However, 2GB told 7.30 no formal complaint was received from Perez, Moore or Bowen.

Macquarie Media Chief Executive Officer Adam Lang told Starts at 60 in a statement: “As previously stated, all staff at Macquarie Media are required to adhere to a workplace behaviour policy which includes a responsibility to maintain a safe working environment and report any matters of concern. Any current or former staff are encouraged to register a complaint or raise any concerns they have directly with the company, as is the appropriate process. In the interest of fairness to all parties, all matters reported will be investigated on a confidential basis and the outcomes are discussed directly with the people involved.

“The concerns raised by these three former staff members relate to allegations that are between 5 and 10 years old. After these allegations were first made on social media we invited anybody with a complaint to contact the company directly. We also contacted Mr Bowen directly to request details of his concerns and offer any support he may need given his personal circumstances as disclosed on social media.

“That offer remains open. To date, we have not received details of any concerns from Mr Bowen or any of the former staff members. We would again invite any complaints or concerns to be raised directly with the company to ensure that they can be dealt with promptly and fairly. Should those former staff be concerned about how management might handle their concerns, 2GB has also appointed an external consultant to be available to them.

“Ray Hadley has made statements on air again this week to address the recent claims made on social media and then in the broader media: ‘I took responsibility for my former behaviour, which has been well-documented. I gave my word in 2013 to my fellow staff members, the sort of culture I grew up in would no longer be the standard’, he said.”

Are you a fan of Ray Hadley’s radio show?