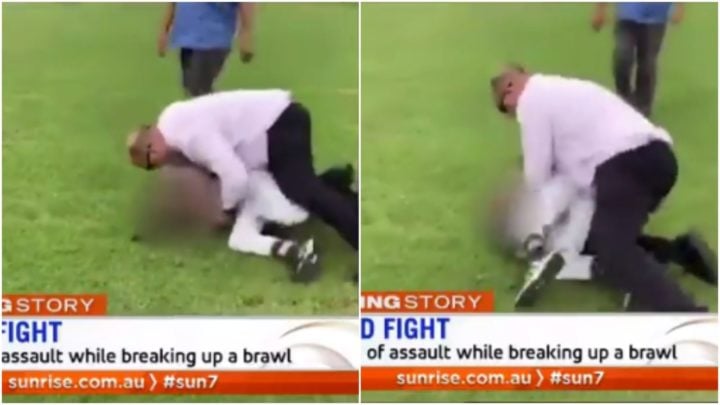 The associate principal has been stood down while an investigation is carried out. Source: Twitter/Sunrise.

A deputy headteacher has been suspended and an investigation launched after the long-serving educator was filmed pinning a high school student to the ground, as he attempted to break up a fight between two teenage boys.

Footage showing Associate Principal Grant Walton attempting to diffuse a brawl, which allegedly involved current and former students at Perth’s Eaton Community College, has been shared widely online, with people divided over whether the teacher was in the wrong to physically step in or whether he should be praised for his actions.

The clip, which begins after the fight has erupted, appears to show Walton tackling the 14-year-old to the floor before pinning him to the ground. Fellow students can be heard shouting “Get off him”, before Walton stands up and releases the unidentified boy.

The student then begins to swing his arms at the teacher and squaring up to Walton with his fists raised before being told to “get lost” by the principal.

It was confirmed on Tuesday that Walton had been stood down from his role at the school following the incident, which took place in March, with the Education Department launching an investigation into Walton for allegedly physically assaulting a student, reports the Daily Mail. However, local police cleared Walton of criminal wrongdoing.

The story has now sparked widespread debate, with many calling out the student for showing “no respect” to the teacher and others calling for the return of corporal punishment in Australian classrooms.

A Perth teacher has been accused of assault while breaking up a schoolyard brawl. Should he keep his job? 🤔 pic.twitter.com/Ha1O714sUB

Caro said: “I do think that the mother is behaving extremely well and with great maturity and I applaud her for that. I don’t condone violence ever, by anyone, under any circumstances. But I do think that sometimes teachers face particular challenges, particularly when there’s a fight going on.”

Samantha Armytage agreed, saying that the force used was “not a huge amount of violence”. While Davis questioned what had happened before the cameras began rolling to spark that reaction from the teacher.

“I find it hard that a man of his experience and also size would react like that, unless he had fair provocation to do that,” Davis said. “I know the investigation is underway but what has led up to that moment, that’s the big thing.

“If there was something that was done to the teacher, where do you draw that line about stepping in and having self preservation and self defence. Because we see this kid shaping up to the teacher.”

He aded: “Can you imagine doing that when you were at school? Where are the consequences for your actions?”

The boy’s mother also defended Walton, describing him as a “good teacher”, in an interview with 7News, saying he’s “done a lot of good”. However she told reporters that her son should receive an apology.

And people took to social media to share their opinions too, with one person writing in Walton’s defence: “The video shows a man restraining a child who is in a fit of rage. Had he stood back and observed we would be accusing him of negligence.”

Another said: “Should keep his job. Blame the parents for their children’s behaviour. Feel for the teachers.”

What are your thoughts on this story? Do you think it’s right that he has been suspended? Or do you think the teacher acted appropriately in those circumstances?