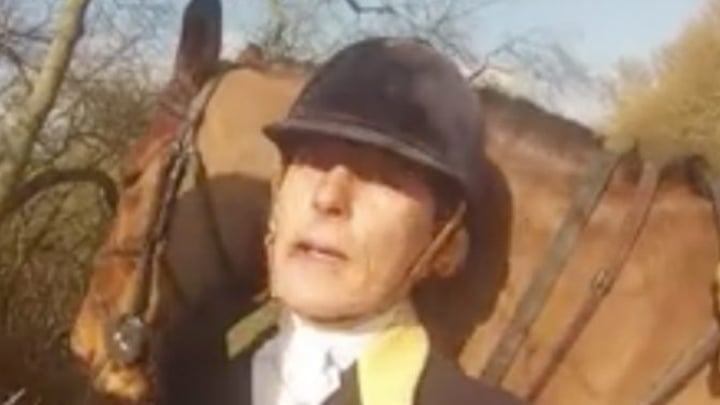 Princess Eugenie's godmother Lulu Hutley is in hot water over an incident that allegedly took place between her and a protestor during a fox hunt. Source: Guildford Hunt Saboteurs/Facebook.

We’ve seen members of the royal family and their distant friends and relatives in the headlines for the wrong reasons before.

But this one is certainly different.

Princess Eugenie’s godmother Lulu Hutley has been accused of “whipping” a protestor during a fox hunt over the weekend.

And according to reports in The Mirror, the accusation against her is being investigated by the police.

A video and photos, posted on social media by the Guildford Hunt Saboteurs, claim to show Hutley “whipping” the protestor.

According to the Saboteurs, 56-year-old Hutley lashed out at one protestor with her riding crop.

“The hunt claimed today was a ‘fun day’ as Princess Eugenie was apparently in attendance but that clearly wasn’t the case,” they posted on Facebook.

“While the hunt looped around a few times in an attempt to lose us, sabs tried to get to the nearest road and were rammed against a fence and then struck with a whip by Lulu Hutley (whom is the godmother of Princess Eugenie – The Lairy Godmother).”

So, what does Hutley have to say?

Well the hunting party she was with on the day defended her to The Mirror.

“You can clearly see Lulu is holding the whip upside-down in order to hit the gate, not the person,” a spokesman said.

“She saw the protester was trapped between the horse and the gate and was trying to make a noise by banging on the gate to get the horse to back off.

“It was quick thinking by one of our Masters in a dangerous situation and it’s terribly sad it’s being misrepresented.”

Police told The Mirror they were investigating claims of an assault as a result of the footage and photos.

Hutley is a close friend of Sarah ‘Fergie’ Ferguson, the Duchess of York.

What do you think? Does it look legitimate to you? Or could it be a beat-up?