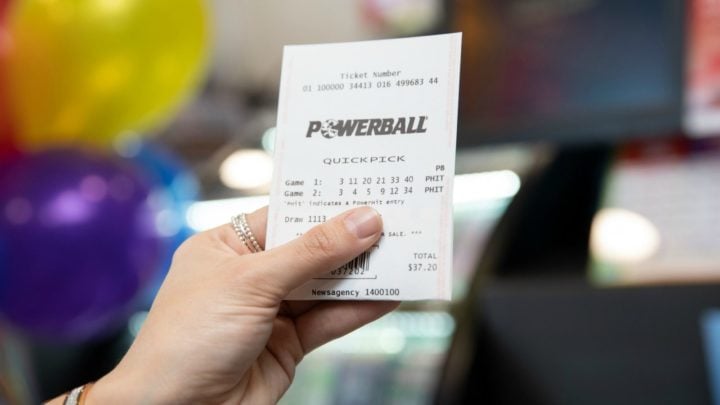 A grandmother has come forward to claim her Powerball millions. Source: The Lott.

An “overwhelmed” Aussie grandmother has finally claimed the last Powerball $150 million jackpot prize, taking home an incredible $50 million to share with her family – after spending the last week unaware she’d even won.

The retiree, from Ipswich, Queensland, admitted while she’d heard the third winner was from her area, she hadn’t looked at her ticket as she never believed it could possibly be her. And as she comes to terms with the shock, she’s already got some heartwarming plans for her new fortune.

The woman, who has chosen to remain anonymous, now joins a Brisbane man and a Sydney dad who also won their share of the massive prize. Phoning in to claim the win a week late, the woman told The Lott: “Thank you… I can’t believe it. I knew I wouldn’t be able to believe it until I called you but now I’m on the phone to you and I still don’t believe it! I checked my ticket about one million times last night on the app and then again on the website.”

“I kept putting off checking my ticket because I was waiting to hear that someone else had claimed the prize,” she added. “But then when I hadn’t heard an update, I thought to myself ‘I’d better check that ticket’. I always buy a ticket into the big jackpot draws but just like everyone else, you never actually think it’s going to be you!”

When asked how she plans to spend her cash, the woman had family at the forefront of her mind as she insisted she will share it with her siblings, children and grandchildren – making them all instant millionaires. “Well to begin with I’m going to make all my siblings, children and grandchildren millionaires!” she joked. “And I will be buying myself a beautiful new home as well!”

The woman bought the ticket from newsXpress Brassall and owner Devinder Bassie said of the gran’s win: “We’ve spent the past week frantically checking Powerball tickets… It’s created an incredible buzz in store as hundreds of customers scrambled to check their entries to see if they were the winner.

“We are absolutely delighted and relieved to know this woman has claimed her prize. Congratulations to her and we have no doubt she will really enjoy her incredible prize!” Amazingly, it’s the second huge lotto prize in the area, with a mum from Ipswich taking home a $40 million Oz Lotto prize in June.

On top of the three $50 million division one winners, The Lott confirmed there were also 4,648,104 winners across divisions two to nine in the Powerball draw. They all collectively took home more than $81.87 million.

After hearing the news he’d also won big, the Brisbane man admitted he couldn’t sleep afterwards, telling The Lott: “I am so incredibly overwhelmed. I checked my ticket late last night after the draw. I’ve been wide awake ever since. I couldn’t sleep at all. But I really didn’t want to get my hopes up.”

When asked how he planned to enjoy his prize, the man added: “Well I’d love to build a house. I’d really love to take some time off work to spend some quality time with my family and do some travelling. The rest, I’m going to have to wait and see. I need to let the news sink in!”

And the Sydney dad who took home the other third revealed he was “speechless” on hearing the news and added: “I think I might have to take the day off work to calm down and think about how I will use this prize. There’s no way I’d be able to concentrate!”

How would you spend the money if you won the lottery?