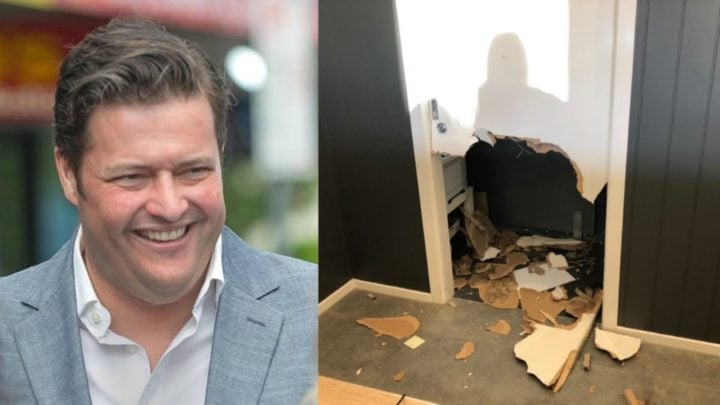 Will Fowles will take a month of paid leave for treatment after smashing in a door at a Canberra hotel in an angry outburst. Source: Facebook/ Will Fowles MP and Twitter/ Kellie Sloane.

Television presenter Ben Fordham has sparked a controversial debate after claiming Victorian MP Will Fowles should be sacked over his “fit of rage” at a Canberra hotel on Thursday morning.

The 42-year-old appeared on the Today show on Friday to discuss the Labor Party member and his fiery outburst which saw him smash in a door as he argued with staff over access to his luggage at Abode Kingston.

Fowles was questioned by police in relation to the matter and later revealed it happened following a battle with drug and alcohol addiction, which he’s recently undertaken a course to try to combat.

It comes after The Age reported that the Victorian politician would be taking months off on full pay – a decision which has caused some controversy across the country.

Sharing his thoughts on the leave of absence, Fordham said he doesn’t agree with Fowles being paid during his time away from politics.

“You can’t have someone like that representing anyone or anything,” he exclaimed on Today. “He shouldn’t be suspended on full pay, he should be suspended on no pay and I’m sorry the whole argument of he’s been through a tough time, he’s battling with some problems…Why do we always hear about these things when someone has made an absolute goose of themselves?

Fordham added: “The bloke should be sacked. If he had any class, he’d resign. This should not even be a question mark.”

Others were in agreement with Fordham, with many Aussies taking to social media to share their thoughts on the matter and how Fowles should be dealt with following his outburst.

“While so many Australians are struggling to make ends meet, this rotund human gets to sort himself out and be well-paid for it… sound fair to you?” one person wrote on Twitter.

Another added: “Full pay and didn’t get charged?… If I got pissed and kicked in a hotel door I’d be locked up and charged.”

While a third said: “If you or I did this damage, we would have been arrested and charged with criminal damage. Totally unacceptable behaviour from someone who is supposed to be setting an example for the rest of us. He needs to resign and to be charged like the rest of us would be.:

However, not all are against Fowles with Victorian Premier Daniel Andrews throwing his support behind the politician as he battles with his mental health.

The 47-year-old said he believes Fowles is sincere in his apology and will stand by him in his time of need.

“He’s also indicated he has addition issues,” Andrews said according to The Age. “He has my full support as he gets the treatment and care that he needs.”

What are your thoughts on Will Fowles being paid to take leave for treatment? Do you think it is right or should he go unpaid for that time period?