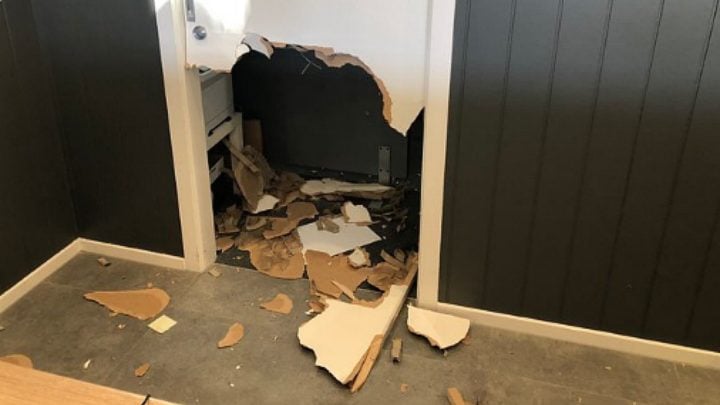 Labor MP Will Fowles reportedly smashed in a door at a hotel in Canberra in a "rage" over access to his luggage. Source: Twitter/ Kellie Sloane

A Victorian politician has found himself in hot water after allegedly being embroiled in a row with staff at a Canberra hotel on Thursday morning.

The Member for Parliament, named by the Sydney Morning Herald as Will Fowles, has reportedly been questioned by police in the country’s capital over a heated exchange over access to his luggage while staying at Abode Hotel in Kingston.

Photos of a smashed in door have been shared online, allegedly caused by the Labor representative of Burwood in east Melbourne flying into a ‘rage’ during the argument.

Sharing details of the events as they unfolded in Canberra, Life Education NSW Chief Executive Kellie Sloane said a politician went into a “rage” with staff over his bags.

“So here’s the latest,” she wrote on Twitter alongside the photo. “A politician ( I don’t know who) has gone into a rage after discovering he couldn’t access his luggage. Police say he’s now calmed down but is facing charges.”

So here’s the latest. A politician (I don’t know who) has gone into a rage after discovering he couldn’t access his luggage. Police say he’s now calmed down but is facing charges. pic.twitter.com/VRKu5p2s2t

Sloane continued to update followers on the incident as she apparently waited outside the hotel with other guests while police dealt with the matter.

“I’m listening to police talking to manager about whether it’s necessary to charge him,” she wrote.

“The situation was serious enough that guests including me were unable to enter the hotel for a while – and were outfit in -2. The first lot of police described him as ‘a piece of work’ who wouldn’t calm down. But they now say he is calm and being very reasonable.”

Later Sloane spoke to 3AW about the incident explaining she had returned to the hotel at about 7.30am on Thursday morning to go get a coffee and was told by security she couldn’t enter.

“(They said) there was a big due going nuts and having a meltdown because he couldn’t reach his luggage, it was a room behind reception and reception wasn’t open,” she said.

“They guy had bashed down half the door to get in.”

ACT Police confirmed there was an incident at the hotel on Thursday morning, explaining in a statement that they received a report of disturbance at the facility at around 7.50am.

They could not confirm the person’s identity for privacy reasons but said officers were on patrol nearby at the time of the incident and the matter was resolved.

“At this time, no charges have been laid,” an ACT policing spokesperson said. “Police are investigating the circumstances surrounding the incident in consultation with the business owners.”

Starts at 60 has reached out to Will Fowles and Abode Kingston for comment.