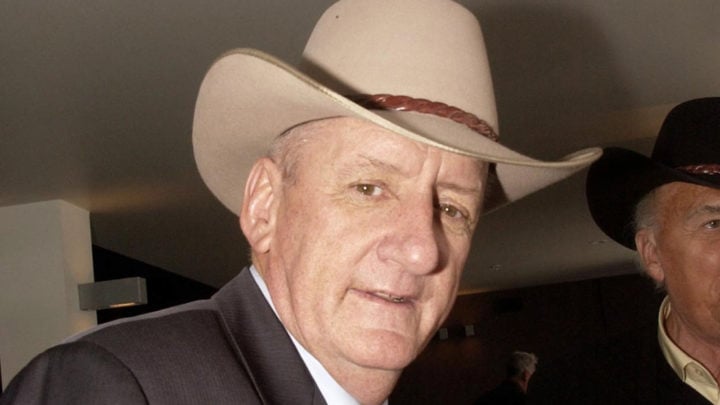 Thousands came together on Thursday to honour Tim Fischer who passed away last week. Source: Getty

Fischer’s brother Tony, the only family member to speak, remembered his beloved brother as a “normal kid” who was prone to dreaming and appreciated theatre and music. “You have no doubt heard and read many of the achievements of Tim in his life and learnt of his gifts and many qualities of a human being. Thank you Tim for enriching all of our lives.”

Meanwhile, Prime Minister Scott Morrison also took to the stage to honour the late politician, paying tribute to his “infectious” personality. He said: “Tim Fischer was an original. Emphatically made in Australia,” he explained. “A big man in every sense of the word. He was a deeply honest man and he was no stranger to humility.”

Morrison continued: “Tim was infectious. He had the ability to focus all of his attention on you. He would give himself over completely in his engagement with you. You had his attention. You mattered. He listened. And he always remembered. Tim understood the value of people in his life and he never expected anyone else to do what he wouldn’t do. When his country called, Tim Fischer never failed to answer… Australia will always be in his debt. Tim Fischer was one of a kind and the boy from Boree Creek has left us too soon. Rest in peace.”

Speaking before the memorial service, Morrison also added: “It’s a pleasure for Jenny and I to be here to pay tribute to Tim. Tim was as big as Australia and will forever be remember as that. A great man, a dear friend and we loved him dearly.”

Bill Baxter, Mr Fischer’s best man, has also paid tribute to his close friend: “It’s often said that in politics you have hundreds of acquaintances but few true friends. That didn’t apply to Tim Fischer. He had hundreds of thousands of friends and he was a true friend of mine for over 50 years.”

He continued: “He understood real people there wasn’t a person he walked past that he didn’t want to find out about and equally there wasn’t a single person he met who didn’t instantly fall in love with him. Our lives were changed for the better because we knew Tim Fischer.”

Ross Jackson, Fischer’s good friend, also paid tribute to the late politician and spoke of their common interest in trains: “Six months ago Tim contacted me about what he expected from his funeral train, I can assure you it’s nothing he expected.” Jackson also revealed he first met the former deputy prime minister at a basketball match when he was just 12 years old, with the pair bonding – and remaining friends ever since – due to their shared passion.

Meanwhile, former Prime Minister of Australia John Howard also spoke of the late pollie outside the memorial service: “He was a great colleague… we of course formed a close personal and political bond. He was wonderful and very close deputy prime minister and I’m very grateful for what he did to cement the coalitions arrangement. I mourn his passing and give my love to Judy, Harrison and Dominic.”

Others took the opportunity to pay tribute to Fischer in the lead up to the memorial service with opposition leader Anthony Albanese posting a short message on social media. “Headed to Albury today to farewell Tim Fischer, an honourable gentleman and passionate Australian #Respect,” he wrote on Twitter.

MP Darren Chester added: “Will be an honour to attend today’s State Funeral in Albury for Tim Fischer. Conscripted in 1966, Tim trained as an officer served in Vietnam as a second Lieutenant. Wounded in action, Tim went on to an extraordinary career in politics public life. Thank you for your service.”

Will be an honour to attend today’s State Funeral in Albury for Tim Fischer. Conscripted in 1966, Tim trained as an officer & served in Vietnam as a second Lieutenant. Wounded in action, Tim went on to an extraordinary career in politics & public life. Thank you for your service. pic.twitter.com/G7Zty59zBG

Earlier today, a train, which departed from The Rock in New South Wales, carried Fischer and his casket to Albury railway station ahead of his state funeral, where hundreds of wellwishers crowded to say their final goodbyes as trains was one of the former deputy prime minister’s great passions. A plaque with the words “Vale Tim Fischer: 1946 – 2019” was fixed to the front carriage, while the coffin was adorned with an Australian flag and an Akubra hat – Fischer often travelled the country in his trademark Akubra hat.

The 1930s train carrying Tim Fischer’s coffin to Albury for his state funeral. The former Deputy PM planned this. It was quirky, but moving ..he would have loved it. 6pm #7NewsMelb pic.twitter.com/pH6TotldRc

Two beautifully poignant images by press gallery photographer Mike Bowers as Tim Fischer’s casket is taken from Albury Railway Station. They tell the story of Tim’s service to his country in uniform and as a passionate representative of regional Australia. @mpbowers pic.twitter.com/0PcJehp1Db

Meanwhile, PM Scott Morrison shared a photo alongside his own tribute, writing: “Tim Fischer was a dear friend. Jenny and I are deeply saddened by Tim’s passing. Tim Fischer was a big Australian in every sense of the word. Big in stature, big in his belief, big in his passion, big in his vision for what Australians could achieve… And big in his view of Australia’s place in the world. As a result, Tim Fischer will forever cast a big shadow on our nation. Jenny and my thoughts and those of our entire nation are with Tim’s wife Judy, their sons Harrison and Dominic and his extended family and many friends.”

Thank you Tim, we loved you very much. pic.twitter.com/RfUnIXysbH

The 73-year-old, who has faced a tough fight with acute leukaemia for 10 years, revealed just months ago that he had turned to chemotherapy to fight the disease. Meanwhile, late last year Fischer appeared on ABC’s Australian Story where he admitted his prognosis was “not good”, with hope and prayer keeping him strong throughout the difficult time.

“It’s as it is. At three score plus 12, you take the cards that you’re dealt with and hope and pray,” he told the program back in November. It’s not the ex-politician’s first cancer fight as he was previously diagnosed with bladder cancer, prostate cancer and two melanomas – however this was the most serious.

Tim revealed on the show he believed the health blow could be down to exposure to the chemical Agent Orange during his service in Vietnam in the 1960s. Meanwhile, his son Harrison, who has been diagnosed with autism, found it more difficult to discuss his father’s condition. He told the show in November: “I struggle to think about what he says with that, because it’s a bit sad that Dad’s not well and he could die any day, probably … It makes me feel really upset.”

“It was shattering, it was disappointing, it was challenging. And initially I pushed back against it in a somewhat crazy way,” Tim explained on Australian Story. It led to Tim realising he also had a mild form of autism himself, having had an unusual lifelong fascination with railways and transport. For Harrison, that fascination lies in politics – but unlike his father, he’s a Labor supporter.

What are your memories of Tim Fischer? Do you have a message for his family and friends at this difficult time?