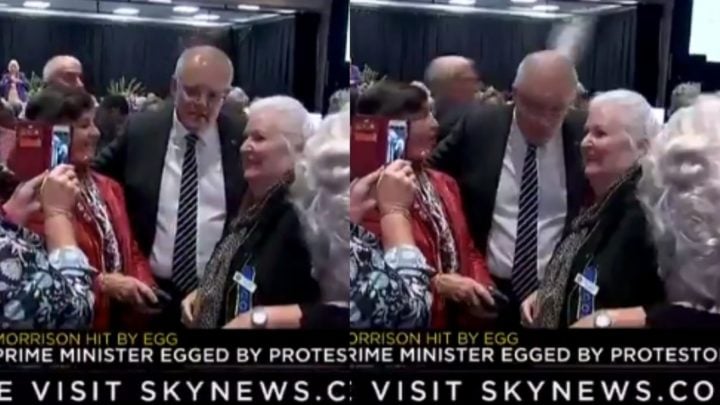 Scott Morrison has hit out at “cowardly activists” in a furious Twitter outburst after he was egged by a protester while attending a Liberal party event in the run up to the federal election.

The Aussie PM was filmed posing for photos and chatting with a group of older women at the event in Albury, New South Wales, when a hand can be seen flying up behind him and an egg is seen skimming off his head.

While Morrison immediately spun round, the protester responsible was not visible on camera. However, according to multiple reports, it was a woman.

The prime minister has now taken to Twitter to slam the “thuggery” and even claimed the incident led to an elderly woman being “knocked off her feet”.

.@tomwconnell: It looks like the egg basically bounces straight off @ScottMorrisonMP. This has just happened at the Country Women's Association.

“My concern about today’s incident in Albury was for the older lady who was knocked off her feet. I helped her up and gave her a hug. Our farmers have to put up with these same idiots who are invading their farms and their homes,” he wrote.

Morrison added: “We will stand up to thuggery whether it’s these cowardly activists who have no respect for anyone, or militant unionists standing over small businesses and their employees on work sites.”

We will stand up to thuggery whether it’s these cowardly activists who have no respect for anyone, or militant unionists standing over small businesses and their employees on work sites.

According to The Mail Online, the woman was knocked over when Morrison’s bodyguards attempted to wrestle the female protester away.

A woman – allegedly the protester – was then seen walking away wearing a red hat and holding a six-pack of eggs, but when questioned about the incident by reporters and asked if it was her intention for someone to be knocked over, she replied: “No that was not my intention. I am sorry for that.”

This girl says she’s sorry an older woman got caught up in the debacle – she brought a 6 pack of eggs pic.twitter.com/EHWxSBCdVb

It comes after a 17-year-old was filmed breaking an egg over Senator Fraser Anning’s head in March while he spoke at an event in Melbourne’s southeast.

Will Connolly was later dubbed ‘Egg Boy’ after the footage went viral and he later admitted what he did was wrong during an appearance on The Project.

“I understand what I did was not the right thing to do. I can understand why some people would react the way they did,” Connolly said. “There is no reason to physically attack anyone.

Do you think this protest was a step too far?