The feud begins: Dutton lashes out at Kristina Keneally over border control 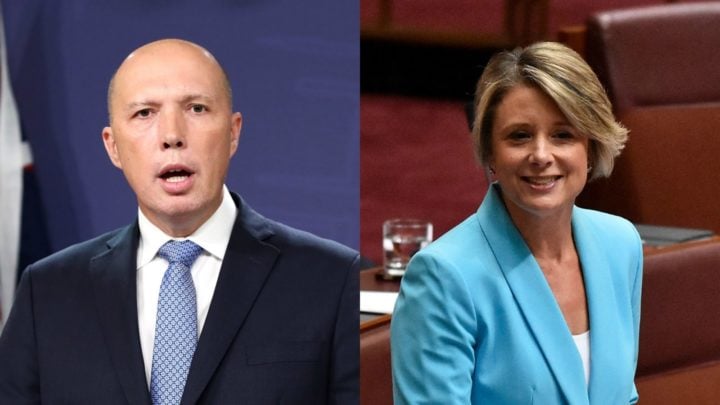 Peter Dutton and Kristina Keneally have lashed out at each over the country's boat turnback policy. Source: Getty

Within moments of being handed the new position on Sunday, Keneally was targeted by Dutton who criticised her opinions and questioned if she was the right person for the job in a harsh statement to reporters.

“Because, when you look at all that she said over a number of years, there couldn’t be anyone less qualified in the Labor party to be the home affairs shadow minister,” Dutton said, according to the SBS.

The politician also took to social media to vent his opinions, writing on Twitter: “It’s not for me to offer KK advice, but it might be a good idea to get a security briefing from the Dept before she makes any more embarrassing statements or policy on the run.”

It’s not for me to offer KK advice, but it might be a good idea to get a security briefing from the Dept before she makes any more embarrassing statements or policy on the run #worsethanneumann

Dutton was referencing the senator’s previous declaration of support for onshore processing and her calls for a royal commission into the treatment of asylum seekers on Nauru and Manus Island. The comments were made back in 2015 in an opinion piece written for The Guardian against boat turnbacks. This is a stark difference to Labor’s recent claims the party is in support of refugee turnbacks.

On Monday the new cabinet member hit back at Dutton claiming despite her previous comments, she was in support of boat turnbacks – and admitting offshore processing was necessary as long as people were treated humanely.

“Whilst I fully support offshore processing, boat turnbacks where it’s safe to do so, and regional resettlement, I do not believe offshore processing needs to be indefinite detention and necessarily cruel,” she told the Herald Sun.

Keneally added to The Australian: “Boat turnbacks are an essential part to making sure people don’t drown at sea. We cannot have a system whereby thousands of people risk their lives and drown at sea. That is not what a humane and compassionate nation should allow to happen in its region.”

However, the politician also hit back at her rival, claiming Dutton hasn’t done a thing to support Australians and it’s Prime Minister Scott Morrison who has taken action with regards to refugees.

She claimed to The Australian that the number of “plane people” who have arrived in Australia has grown substantially since Dutton has been in his position and exceeds the number of people who came to the country while Labor was in power.

Are you happy to see Kristina Keneally appointed the position of shadow home affairs minister? Where do you stand on boat turnbacks?