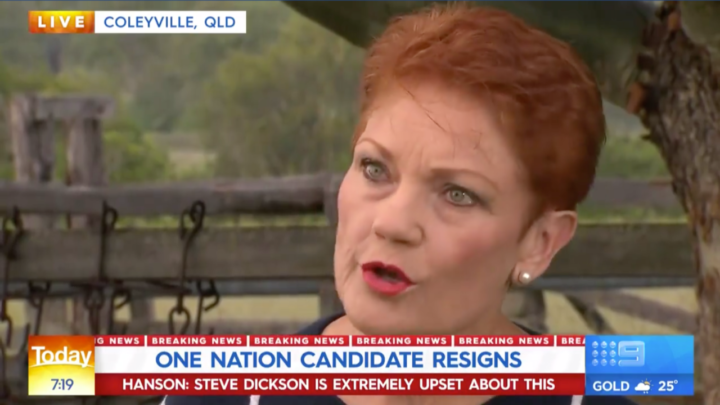 The One Nation leader confirmed that Steve Dickson has resigned. Source: Getty.

With just weeks to go before voters across Australia head to the polls in the federal election, Pauline Hanson’s One Nation has once again been rocked after leaked footage which shows one of her candidates groping women and making lewd comments at a US strip club came to light.

The footage emerged on Monday night when it was aired by Channel Nine’s A Current Affair program, and now Hanson has appeared on television to address the matter, revealing that Steve Dickson has resigned from the party in a fiery press conference.

Speaking live from Coleyville, the Queensland Senator criticised her former colleague’s language and behaviour, before storming away from the cameras after reporters turned their questions to the issue of lobbying for cash from the NRA.

“I have always spoken very highly of Steve Dickson but the footage I saw last night cannot be ignored or condoned,” she said. “I am both a mother of three boys and the only female leader of a political party in this country.

“I wouldn’t tolerate my own children behaving this way towards women and I cannot and will not condone my own candidates dealing with women in this fashion either.”

She added that, while strip clubs are legal and “many men in this country have visited one”, she found Dickson’s use of lewd language and behaviour “unacceptable”, saying it does not meet my expectations.

Hanson added: “Steve Dickson yesterday offered his resignation from all positions within the party which I have accepted.”

She added: “This video footage was filmed covertly recorded in September 2018 by Al-Jazeera … [they] have sat on this footage for over seven months and conveniently gave the tapes to A Current Affair less than three weeks out from a federal election.

“If they had come to me months ago when the event occurred I would be taking the same action then as I am now.”

The press conference came to somewhat of an abrupt end however, as Hanson retreated to her branded vehicle and declared she would not be answering any more questions.

The revelations come just 18 days before the federal election, following what has been a tough few months for Hanson and her party after the Al-Jazeera documentary How to Sell a Massacre was aired by the ABC at the end of March.

Following the documentary, which appeared to show One Nation Chief of Staff James Ashby and Steve Dickson lobbying pro-gun groups for cash donations, the LNP announced it would be preferencing the opposition above One Nation.

The party has also suffered a blow in popularity recently, as a Newspoll from earlier this month showed that support for One Nation had plummeted to just 4 per cent – its lowest result since 2016.

What are your thoughts on this story? Do you think it was the right decision for Steve Dickson to resign?