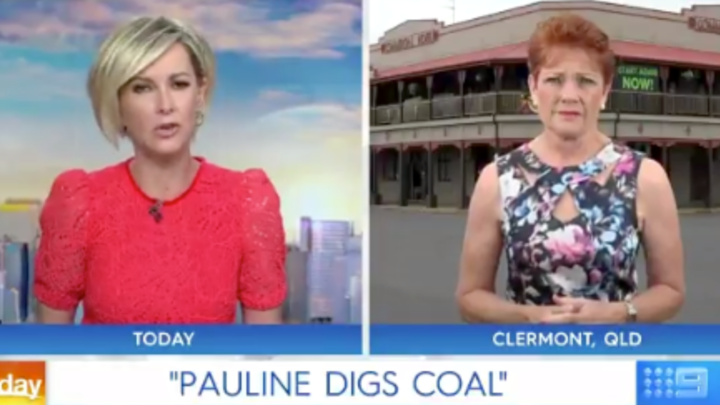 It has been a tough couple of weeks for One Nation leader Pauline Hanson, after two of her colleagues were revealed to have lobbied senior NRA officials for donations, she underwent emergency surgery for appendicitis and her party suffered a drastic drop in support in recent polls.

But, as we edge closer to May’s federal election, the Queensland Senator proved she isn’t going to back down without a fight as she locked horns with TV presenter Deborah Knight in a fiery clash of words during an appearance on Channel Nine’s Today show on Tuesday morning.

Hanson was discussing coal mining on the breakfast news program, appearing from Clermont, Queensland, when the topic turned to climate change, which she described as nothing more than a “fear-mongering” tactic employed by the left, denying that humans could be held accountable for global warming.

“What happened to the dinosaurs?” she asked Knight. “How did they die off? Humans didn’t create it.”

“What happened to the dinosaurs, how did they die? Humans didn’t create it.” Pauline Hanson has put her support behind the controversial Adani coal mine ahead of protests this week, denying the effects of climate change. #9Today pic.twitter.com/PZMBjcE3xy

She continued: “This has been man-made, this fear mongering about climate change. If climate change is happening, it’s not because man is causing it to happen, we’ve got volcano eruptions that actually spew up more carbon emissions – even the oceans do.”

Knight, who replaced Karl Stefanovic on the morning show last year, then hit back, saying: “I didn’t think you were a climate change denier though Pauline?”

Asked about the impact climate change was having on her home state, Hanson then denied there being “any scientific fact” and called for “peer reviews” of scientists working in the field, urging Knight to stick to the facts.

“Well I’m not sure what the scientists would say to that,” Knight then quipped back. “Climate change we know though Pauline is hitting farmers hard, hard-working people on the land, who you say you are a voice for. They’re suffering through droughts, through floods, through major weather events. A lot of farming groups are on board saying we do need to curtail carbon emissions.”

Hanson, who became increasingly irate throughout the chat, also appeared to accuse the Bureau of Meteorology of “fiddling with facts and figures” in relation to climate data.

This isn’t the first time the pair have clashed though, as they previously got into a heated debate last month following the airing of two-part Al-Jazeera documentary How to Sell A Massacre.

The fiery interview came just one day after Hanson appeared in public for the first time in Brisbane following a tumultuous week for her political party, with Hanson refusing to take responsibility for anything that has been said or done by her party, following the release of footage which appeared to show One Nation Chief of Staff James Ashby and Queensland leader Steve Dickson lobbying for cash donations of up to $28 million from the National Rifle Association of America (NRA).

The party was then hit by further scandal when the second part of the documentary was aired on the ABC, which showed Pauline herself apparently suggesting that the 1996 Port Arthur massacre was a conspiracy theory.

However, speaking to Knight, Hanson vehemently denied that she holds those beliefs, saying: “I never said at all that it was a conspiracy theory.

“No, I didn’t. It’s the media that are actually saying that. It could not possibly be a government conspiracy theory.”

What are your thoughts on this story? What do you think of One Nation’s policies?