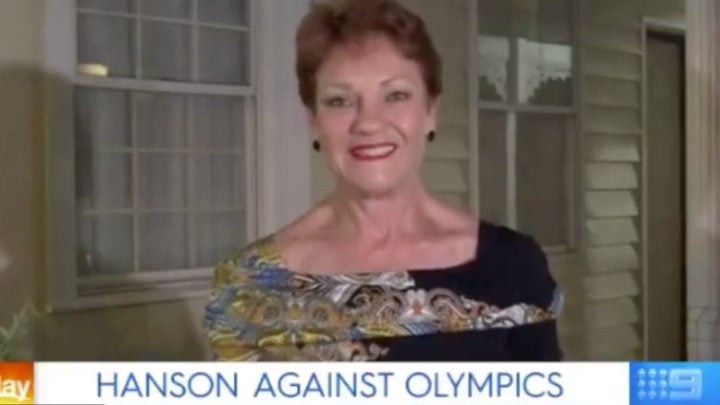 Pauline Hanson is renowned for speaking her mind and she did just that this morning as she launched into an offensive against the current bid for Brisbane to host the 2032 Olympic Games.

The One Nation leader has openly opposed Premier Annastacia Palaszczuk’s campaign on the basis that the state of Queensland can’t afford it, and the senator has even commissioned a total of 52 billboards across the state to spread her message.

Appearing on the Today show on Friday, Hanson clashed with hosts Karl Stefanovic and Allison Langdon as the pair suggested that the games could in fact prove beneficial for the state in attracting tourists, following in the footsteps of the Sydney Olympics in 2000 which were hugely successful.

“It’s a known fact that in modern times when cities have the Olympics there’s a blow-up budget,” Hanson said. “It’s estimated to cost about $8.9 billion to host the Olympics. Can we afford it? No we can’t.”

Hanson then claimed that the state, with a current debt “to the tune of about $90 billion”, cannot afford water in some areas and branded the decision to try and bring the games to Brisbane as “unfair” to those people living in rural and regional Queensland.

Senator Pauline Hanson has commissioned 52 billboards across the state, declaring regional Queensland says NO to the Olympics. Do you agree? #9Today pic.twitter.com/PGMtdY4PaW

Many people took to Twitter to debate the issue, with opinions divided over whether the cost of putting on the event would outweigh any benefit to infrastructure or the economy, or whether it would only prove beneficial.

One person, who agreed with Hanson, wrote: “The #Olympic games is the worlds biggest waste of Taxpayer Cash. We need that money for lots of others things, I don’t want them here.”

Another person commented: “Yes. Fix the problems at home first.” While another wrote: ”

However others disagreed and stated that the world-famous games could benefit the state, with one person saying: “Bring on the Olympics. They also bring massive amounts of community infrastructure and jobs due the construction phase.”

The bid for Brisbane to host the sporting competition was launched by State Premier Annastacia Palaszczuk in December last year who said that the decision to host the games was “about so much more than a few weeks of sport”.

At the time, Palaszczuk said in a statement: “Hosting the 2032 Olympics and Paralympics could be a game changer and deliver 20 years of accelerated opportunity for our State.

“That’s why Cabinet has today made the decision to continue working towards securing a Games – and we will continue to work closely with our partners to ensure we receive the financial support we require from all levels of Government.”

Do you agree with Pauline Hanson? Or do you think the 2032 Olympics would be beneficial for Queensland's economy?