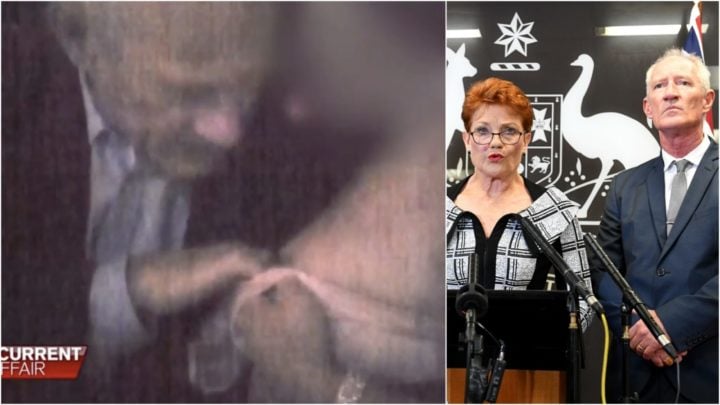 Pauline Hanson’s One Nation party has been rocked by further scandal this week, as hidden camera footage was leaked showing senate hopeful Steve Dickson groping female dancers at a US strip club.

Dickson can be seen putting notes into the bra and underwear of one dancer who joins him at a table, before telling the women to touch his genitals. He can also be seen approaching her as she performs on stage, once again putting more dollar bills in her underwear.

“I’m going to give her my address,” he then tells Muller. “Mate she said she will come over and *** me.

The video was originally captured as part of an Al-Jazeera investigation into One Nation, which concluded with the airing of two part documentary How to Sell a Massacre which aired last month on the ABC.

It was recorded by undercover journalist Rodger Muller at a strip club in Washington DC last year, during the same trip which saw Dickson and One Nation Chief of Staff James Ashby embroiled in a lobbying scandal after they were filmed meeting with senior NRA officials.

It’s less than three weeks until election day, but one senior politician has given his leader a huge headache. #9ACA | https://t.co/JqzwiGTmru pic.twitter.com/Zex4ocD575

“I’ve done more Asian than I know what to do with.”

He also tells Muller that it wouldn’t be a good idea to do this at home in Australia, and that the strip club visit was a “bonus” on his trip to the US capital.

The footage, which ACA senior reporter Dan Nolan said was cut down from a total of two hours’ of vision, also showed the men making the journey back to their hotel, where Dickson is then seen with his arm around another woman in the bar.

Party leader Pauline Hanson has not yet commented on the matter but, according to the Courier-Mail, the Queensland Senator will hold a press conference on Tuesday morning, where she is expected to sack Dickson.

Following the release of the documentary in March, the 64-year-old defended Steve Dickson, as well as her Chief of Staff James Ashby, over their words and actions in the footage.

Speaking about her “friend” Steve Dickson, she said he was “stitched up” and a “victim of entrapment”.

“I’ve worked closely with this man for at least two and a half years,” she said at the time. “I know his family and I have stayed at his home.”

What are your thoughts on this story? Do you think Pauline Hanson would be right to sack Steve Dickson?