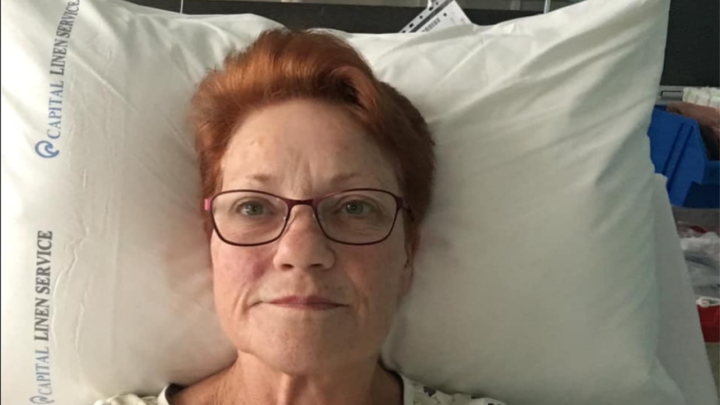 Pauline Hanson has claimed she knows when the election will be held. Source: Facebook/ Pauline Hanson's Please Explain

One Nation leader Pauline Hanson has “leaked election dates” from her hospital bed, claiming she knows the precise day that Aussies will head to the polls next month.

The senator took to social media on Friday afternoon to share her insight into the biggest political event of the year, which could see Labor take over power from the Liberal Party.

Posting a photo of herself resting up in bed prior to her discharge, Hanson said she has been allowed to return home just in time for this weekend’s election announcement.

“Checking out – but not in the way some people would hope,” the politician wrote on Facebook.

“I’ve just been discharged from hospital today. The biggest fight for our country is due to be called this weekend. The election will be on the 18th of May.”

She added: “I know this because the Liberals advertising has been leaked and runs through until the 15th of May.”

The politician went on to slam a number of political parties, making sure to mention their apparent downfalls over the years.

“Never forget it is the Liberal/Nationals, Labor and especially the Greens who have continually destroyed our country and way of life,” she continued.

“It has happened through UN interference or control, free trade agreements and most importantly, poor leadership, dull judgement, lack of vision, and self interest.

“I may not know everything, but I do know I could do a lot better than some of these sycophants. Let the election begin!”

Hanson’s announcement comes days after the 64-year-old promised fans she will be fighting fit when the election comes around, after suffering a tick bite and then being rushed to hospital for emergency surgery

The senator was rushed to hospital on Tuesday for an operation after suffering from “extraordinary” pains in her stomach.

Hanson said she became extremely unwell over the weekend but did not seek medical help until Tuesday when her GP advised her to go “immediately to hospital” for further scans and blood tests.

She was kept in and underwent surgery to remove her appendix. The Queensland Senator revealed the news on social media a day later as she shared a photograph which showed her wearing a hospital gown and hooked up to various machines.

Since then Hanson has kept followers up to date, posting a number of replies about her condition on Facebook. The Australian pollie took the opportunity to thank hospital staff for their care during the stressful time, explaining how precious life really is. She even said she has enjoyed a few laughs with those taking care of her.

Read more: ‘You realise how helpless you are’: Pauline Hanson shares health update

“I have had the best of care Grant,” she replied to a concerned Aussie. “Everyone from the nurses, doctors, admin and those who bring my food and clean my room have been wonderful.

“I told the nurses I couldn’t do their job they are very special people. They tell me they couldn’t do mine and we have a laugh. Very grateful of everyone’s care of me in my present condition.

She added: “You realise how helpless you really are when you don’t have your health.”

Have you decided who you will vote for in the upcoming election?