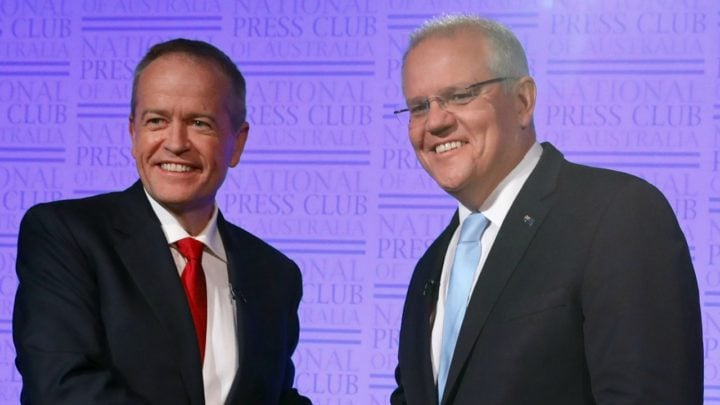 Labor is on track for a win in the federal election according to the latest Newspoll results. Source: Getty

The Labor Party has held onto its lead over the Coalition in the Newspoll results as Australia’s preferred government with less than a week until the election.

As politicians count down the days until Australians head to the polling booths, results from the poll conducted by The Australian have indicated a growing support for opposition leader Bill Shorten.

Labor is still on track for a win at Saturday’s federal election, leading 51 to 49 per cent on a two-party preferred basis. These numbers remain the same compared to last week.

While Scott Morrison is still ahead of Shorten in terms of preferred prime minister, numbers are quickly changing with the current leader dropping further in the polls.

Labor’s Shorten has grown his personal approval rating by three points to 38 per cent, as Morrison dropped slightly to 45 per cent. A further 17 per cent of voters remain undecided over who they would like to see run the country.

As for the primary vote, the coalition has increased to 39 per cent, while Labor sits on 37 per cent.

The latest results follow comments made by the PM’s wife Jenny Morrison on the difficulties their children face by being in the spotlight.

Speaking in an interview with Nine News ahead of next weekend’s federal election, the mother-of-two said their daughters Abbey, 11 and Lily, nine, turn the volume down on the radio whenever they hear negative adverts or comments about their dad.

“It’s hard for them to deal with a whole lot of cameras in their faces,” she told the news outlet on Friday.

“It comes on and I say ‘Well we know dad, we know what dad’s like and we love dad, so take no notice of those things’. Sometimes the children will just turn down the radio when a bad commercial is on, they’ll just turn it down.”

Jenny, 51, also revealed that if her husband is successfully elected on May 18, she will use her platform as the prime minister’s wife to advocate for causes close to her heart, including infertility and multiple sclerosis.

Mrs Morrison’s brother lives with MS and she struggled with infertility herself, undergoing 10 rounds of IVF, before the couple welcomed two daughters, the eldest of whom was born when Jenny was 39-years old.

“I suffered from it for a long period of time and it’d be nice to be able to help people…because I understand it and I get it and it’s hard,” she said.

What are your thoughts on the Newspoll results? Do you know who you will be voting for next weekend? Have you already voted at an early voting centre?