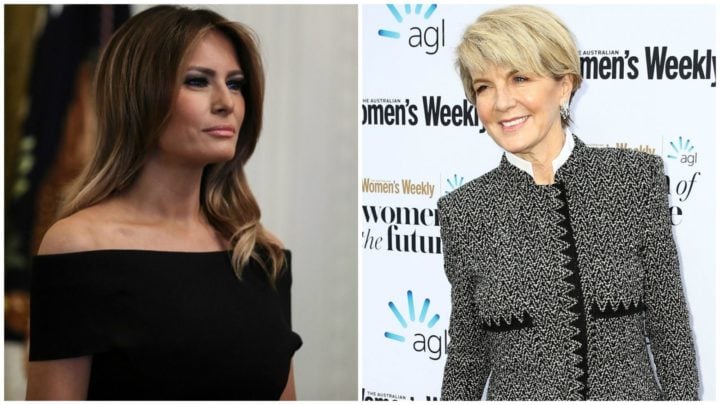 The US first couple are said to have been angered by comments made by Julie Bishop in 2017. Source: Getty.

She resigned from politics earlier this year and made a stylish exit from Parliament House last week, but it has now been revealed that Julie Bishop almost made an enemy out of Melania Trump during her time as deputy leader of the Liberal Party.

The former foreign minister is alleged to have offended the First Lady of the United States when she met Melania and husband President Donald Trump at the UN General Assembly in New York in 2017, The Australian reports.

According to the publication, the First Lady was upset after Bishop publicly revealed that Melania had wrongly assumed she was a spouse rather than one of Australia’s leading politicians during their first encounter.

The former member for Curtin reportedly made the comments at the Adelaide Festival last month, claiming that the President’s wife had mistaken her long-term partner David Panton for the foreign minister instead.

Speaking about gender assumptions and women in politics, Bishop is said to have told the festival audience: “Melania, standing by, ­assumed David was the foreign minister and she said to me: ‘Julie, will you be coming to my ladies’ lunch tomorrow?’ And I said ‘No, David’s going to the partners’ lunch’.

“She thought about that for a while, thinking: ‘Why would Australia’s foreign minister come to the partners’ lunch?’ So this went on for a while until the President explained that I was the foreign­ minister.”

After 20 years in politics it is time to leave🙋‍♀Thank you to everyone who provided support, advice and encouragement💙Now on to the next chapter!👠

The reports also allege that the White House raised concerns over the comments ­with the Australian ­embassy in Washington DC.

Read more: Out with a bang! Julie Bishop dons killer heels as she farewells parliament

Bishop farewelled parliament for the final time last week, sharing two photos on her Instagram page which showed her with her feet propped up on a packing box in her office, wearing a killer outfit and her signature glamorous heels.

The 62-year-old pollie looked amazing for her final goodbye, opting for a zip-up black dress with matching black heels, which took centre stage in the photo with statement silver jewelled heels.

She added large silver dangly earrings to complete her elegant look and appeared in great spirits despite it being an emotional time, as she flashed a wide smile to the cameras.

Do you think Julie Bishop chose the right time to resign from politics? Were you sad to see her go?