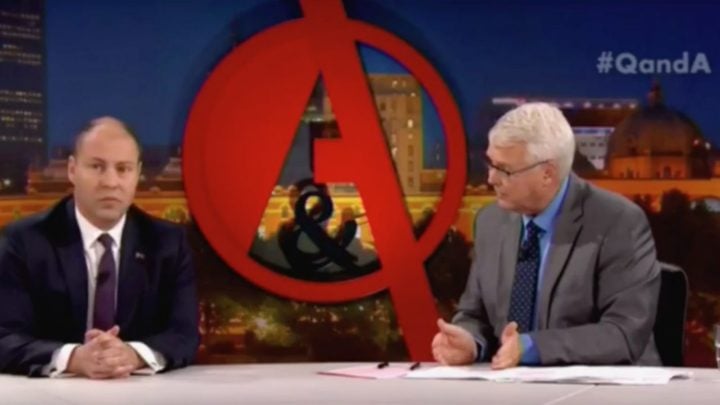 The date of the 2019 federal election is yet to be announced and Josh Frydenberg faced some tough questions from the public and host Tony Jones when he appeared on Monday’s episode of Q&A on the ABC.

One person asked how much taxpayer money would be used to fund advertising and air travel for the PM and ministers this week – given the election announcement had been delayed. Jones also prompted Frydenberg to answer properly and pointed out that a report revealed the party would spend at least $5 million this week.

“Can you tell us, because you did dodge this question yesterday on The Insiders, how much will be spent in this week?” the host asked.

Frydenberg explained that relevant departments would publish costs and that advertising campaigns were focusing on information programs including concessions to businesses hiring staff, programs on power bills, defence force recruitment and cyber safety, rather than budget initiatives. He eventually confirmed the information regarding costs is set to become public after the election.

On the topic of the closure of the Christmas Island detention centre, Frydenberg denied it would put out a “welcome mat” message to people smugglers. He also did his best to explain why the centre was reopened earlier this year at a reported cost of $185 million, only to have its closure announced in the budget, claiming the decision was “imposed upon us”.

When it came to tax cuts announced in the budget, Frydenberg said he wanted all Australians to earn more and to keep more of what they earn.

“Our plan is both immediate relief, because we understand the cost of living pressures but also the long-term, structural reform,” he explained. “Under our plan, when fully rolled out, someone who is on $45,000 will pay one-tenth of the tax of someone on $200,000.”

Also in the episode, Frydenberg was asked about debt trends in Australia, particularly because Australia’s net debt sat at $174.5 billion in 2013 after six years of Labor Government but increased to $354.4 billion after the Coalition was in power for five years.

“The truth is that the debt has increased but now it has peaked and it is starting to be paid back with the first surplus in more than a decade,” Frydenberg explained. “That’s the reality.”

He also faced a question from a cancer patient via video, who asked whether he could match or exceed Labor’s budget reply spending pledge to reduce out of pocket costs for cancer patients who need to undergo treatment.

While Frydenberg didn’t fully answer whether he could match or exceed Labor’s offer, he did note that many more drugs had been added to the PBS and that money was also allocated to other vital healthcare services.

His appearance on Q&A came after Frydenberg followed through on his promise to deliver the first budget surplus in 12 years when he handed down the final budget of the 45th parliament in Canberra last Tuesday.

Outlining the 2019-20 budget in the Lower House, Frydenberg announced a surplus of $7.1 billion and said: “The budget is back in the black and Australia is back on track.

Did you catch Josh Frydenberg on Q&A? Which party will you vote for at the next election?