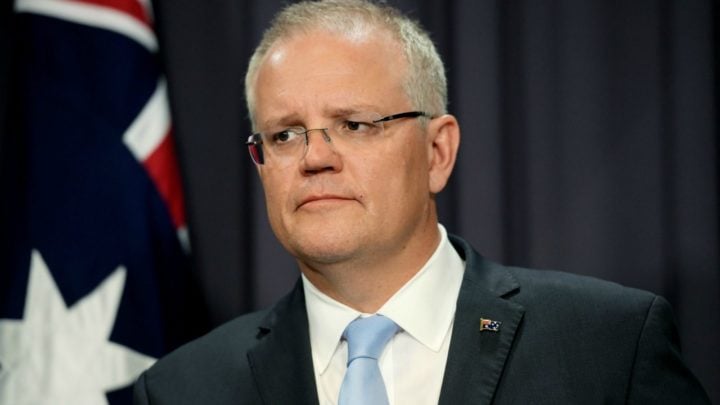 Scott Morrison accused GetUp of being an arm of the Labor Party and The Greens. Source: Getty

Political activist group GetUp has slammed Scott Morrison after he criticised the group and accused GetUp of being an arm of the Labor Party and The Greens. Speaking at the South Australian Liberal State Council in Adelaide on Saturday, Morrison hinted at another inquiry into GetUp’s political independence, which he said operates “in the shadows of politics”.

Morrison spoke of GetUp’s “misogynist” and “bullying”campaign against Coalition MP Nicolle Flint at the May 18 election where the lobby group labelled her South Australia’s “most backwards politician”. “They should be ashamed of what they did to Nicolle Flint in Boothby,” he said. “They should be ashamed of the way they engaged in that campaign. The misogyny and the bullying.

The prime minister said that GetUp worked on the principle of “plausible deniability”, adding: “They are an anti-Liberal Party. They are a partisan Party. With the objective of standing against everything our Party believes in. And they should be called out for it.

“But worse than that. Those who operate in the shadows of politics like GetUp! when they deny they have anything to do with the vile, personal attacks on our candidates that only seem to happen in seats where Getup! are running campaigns by the way, remarkable coincidence.”

Morrison continued: “So in this term, we will revisit Getup’s claim that they are politically independent – because we all know that’s a lie. We need to shine a bright light on this shadowy group that operates and seeks to deceive Australians about their true intent.

“We know who they are, and Australians are waking up to it yesterday. And my message is to them, that the days of plausible deniability are over. Australians are on to you. And the Government will be following through.”

GetUp has since hit back at the prime minister saying, forcing the Australian Electoral Commission (AEC) to investigate the group again would be “a political stitch-up and a waste of public money”. Earlier this year, the AEC found GetUp’s campaigns were not an “associated entity” of any political party.

“The Prime Minister is leveling extraordinary attacks on everyday people who participated in politics this election – with no evidence,” GetUp National Director Paul Oosting said.

He said GetUp members are “teachers and nurses, mums and dads, students and pensioners” who had spent this election campaign having “heart to heart conversations with voters”.

Oosting continued: “Afraid of being challenged or held to account on having no policy on climate change and the lack of support for raising Newstart he is trying to shut down democratic participation, slurring the name of everyday people participating in our politics.

“This would be the fourth attempt by the hard right to shut down independent grassroots campaigning. Politics belongs to everyone.”

Have you been following this story? Do you agree with Scott Morrison?