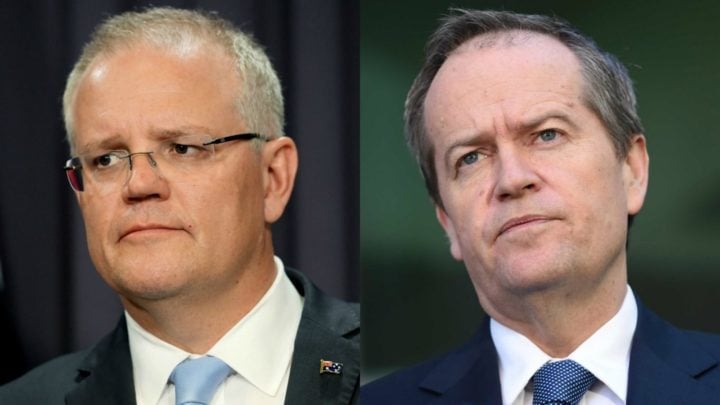 With the federal election creeping closer by the day Prime Minister Scott Morrison and Opposition Leader Bill Shorten are doing all they can to entice voters to side with their respective parties at the polls, but it appears their efforts are largely falling on deaf ears.

A new YouGov Galaxy poll taken for News Corp and published on Sunday reveals voters are somewhat disenchanted with both leaders and their parties after two weeks of campaigning.

The poll revealed a lift in support for the Coalition, with data showing the party’s primary vote has jumped two points to 37 per cent since March. However, Labor is still on track to win the election 48 to 52 per cent on a two-party preferred basis.

The poll surveyed a representative sample of 1,012 Australian voters in both capital cities and the regions and found that the cost of living, health spending and tax rates where among the top concerns for Aussies heading to the polls on May 18.

United Australia Party leader Clive Palmer had the highest disapproval rating out of all the leaders mentioned in the survey at 69 per cent. He was followed by One Nation leader Pauline Hanson who racked up a 67 per cent “not impressed” rating.

One Nation has struggled in the polls since an Al Jazeera documentary showed her chief of staff James Ashby and Queensland party leader Steve Dickson appearing to lobby for cash donations from the National Rifle Association of America (NRA) to water down Australia’s gun laws. Another clip showed Hanson herself apparently suggesting that the 1996 Port Arthur massacre was a conspiracy theory, although she has since claimed the footage was doctored.

Read more: Labor and Coalition given boost as support for Hanson’s One Nation crashes

A Newspoll from April 15 showed support for One Nation had plummeted to just 4 per cent – its lowest result since 2016.

Sunday’s poll results come as both major parties continue to campaign across the country. Shorten was in Melbourne on Sunday to unveil Labor’s $4 billion childcare package, giving more than 300,000 families free childcare.

The plan will increase subsidies for 887,000 families, reducing the average childcare bill by more than $2,100. Labor says every family earning a combined income of up to $174,000 will be better off under its policy.

Meanwhile Morrison took aim at immigration rates and pledged to cap the refugee program to 18,750 people a year if he wins the election. It comes after the government announced a permanent migration level cap of 160,000.

The Coalition says it will also put previsions around refugee immigration if it wins the election, with plans for 60 per cent of refugees to be women and 40 per cent sent to live in rural areas.

Do you know who you’re voting for at the election? Will you be siding with one of the majors or choosing a minor party this year?