‘Do you think I give a stuff?’ Clive Palmer’s explosive clash with Today host 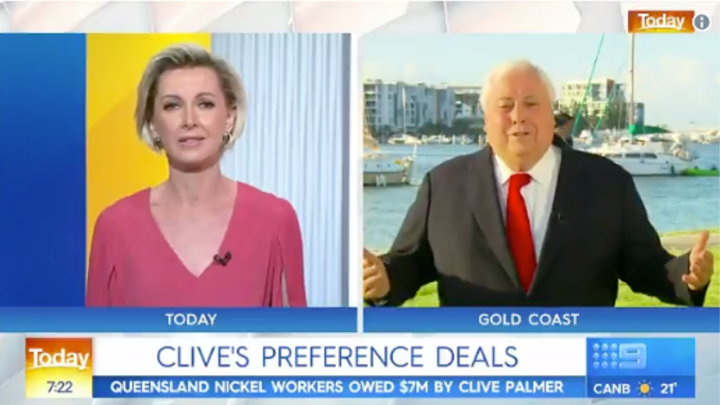 United Australia Party leader Clive Palmer unleashed on the Today show on Monday morning, clashing with host Deborah Knight during a fiery interview ahead of the federal election.

The controversial politician came out all guns blazing for the televised chat, targeting Labor leader Bill Shorten and the latest Newspoll results which has the Coalition in the lead for the primary vote.

Palmer, whose party currently sits at just 5 per cent of the polling vote, didn’t hold back as Knight fired questions his way, particularly when the conversation turned to his preferences in the election and the controversial collapse of his Queensland nickel business in 2016.

“Let’s face it, I’m a bad person,” Palmer told Knight. “Who cares about me? We care about this country.”

He continued: “My wealth is $4,000 million. Do you think I give a stuff about what you personally think or anyone else… I care about this country.”

Knight then questioned whether Palmer planned to pay back the $7 million owed to workers left empty handed following the collapse of his nickel company. The politician had promised a week ago the money would be paid into a trust account “today” however, evidence of this is yet to be seen.

“You’re not listening,” an annoyed Palmer told the host after she quizzed him on when the funds were being transferred. “I said to you a minute ago that I will be paying $7 million into a trust account of a solicitor who will disperse that money to the workers that make the claim.”

“My wealth is four thousand million dollars, do you think I give a stuff about what you personally think?” @CliveFPalmer to @Deborah_Knight. #9Today pic.twitter.com/JsAvt1eRLU

Throughout the chat the Aussie businessman also refused to admit whether he had made any preference deals with Prime Minister Scott Morrison, despite being adamant he would not list Shorten on his ballot slips. The politician labelled the opposition leader a liar and said Labor’s claims they had made informal approaches to him about a deal were completely false.

“[Shorten] would love to have our preferences… They lie, lie, lie,” he told Knight. “That is all Anthony Albanese and Shorten can do. It is not much of an example for our children.”

Palmer’s comments follow the latest Newspoll results, published by The Australian on Sunday night. The statistics revealed Morrison still has a battle for the top position with Labor leading the two-party preferred vote 51 per cent to 49 per cent.

This was a small boost for the coalition since March with votes at 46 compared to Labor’s 54 last month. The Liberal Party has maintained its lead in the primary vote with 38 per cent, down one point since March, while Labor sits on 37 per cent.

As for the smaller parties, One Nation sits at 4 per cent of the primary vote,  the Greens on 9 per cent and the United Australia Party on 5 per cent. Meanwhile, the poll shows Morrison as the preferred prime minister on 45 per cent, while Shorten is up 2 per cent, to 37 per cent.

However, according Palmer the result is “fake news” and his party has much more support than the results indicate.

In the chat on Today the politician said: That is just fake news of course. We are polling much higher than that. And there is 28 per cent of Australians that have yet to make their decision.”

What do you think of Clive Palmer? Have you made your decision on who you will vote for in the upcoming election?