‘He can’t move around much’: Blanche d’Alpuget gives update on Bob Hawke 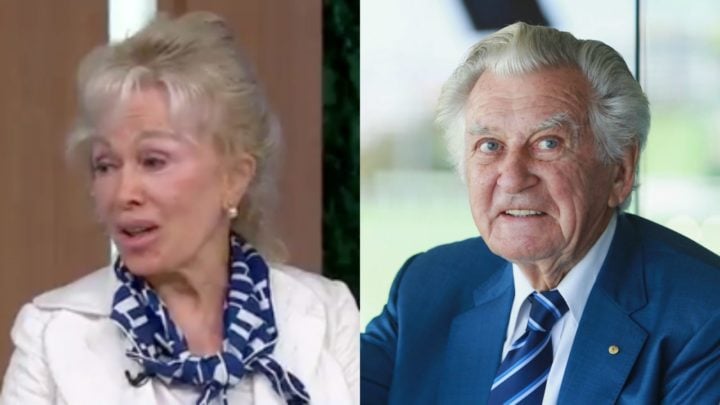 Blanche d'Alpuget said her husband Bob Hawke is struggling with his mobility. Source: Twitter/ The Morning Show and Getty

Blanche d’Alpuget has revealed her husband Bob Hawke “can’t move around much” but insisted “there’s nothing wrong with him” after reports last year that the politician was in terrible health.

Despite fears for the 89-year-old in December following multiple heath issues throughout the year, his doting wife has confirmed the former prime minister simply enjoys spending his days inside.

Speaking on Seven’s The Morning Show on Monday, Blanche, 75, said Hawke is struggling to move around as he used to but is not suffering with anything serious.

“He’s got no fatal illness,” she told the hosts during the program. “There’s nothing wrong with him but he has great mobility problems from pinched nerves in his back, which affects his legs and feet.

Blanche d'Alpuget is opening up on her career, her marriage to Bob Hawke, and her latest book 'The Lion's Torment'. #TMS7 pic.twitter.com/yybF78TNHu

“He can’t move around much and he prefers to stay at home, smoke cigars and do cryptic crosswords.”

Her health update follows news just months ago that the former politician was quite unwell, with him hinting at the time that he might not be around for much longer.

“I’ve had my time, just stick around for a little while,” he told The Courier Mail while enjoying Queensland’s popular Woodford Folk Festival with Blanch. “It’s (health) been terrible.”

Hawke’s revelation came months after he was admitted to the Royal North Shore Hospital in Sydney for a mystery illness.

At the time reports implied that he suffered a stroke, but the ABC later reported that wasn’t the case. A spokesperson for Hawke also explained he wasn’t in hospital with pneumonia.

With his health up and down throughout last year, a tearful Blanche revealed previously that she and Hawke had already planned what he wants at his funeral – admitting she had even bought their graves to ensure there’s no pressure on their children at a time of grief.

Hawke’s one-time mistress, biographer and now wife, gave a very open account of their relationship on ABC’s 7.30 with Leigh Sales in February, as she revealed she’d struggle to continue without her husband, if he were to pass away before her.

Asked if they had spoken about what they’d do if one of them was to die, an emotional Blanche said: “Indeed, we have discussed it. He has no fear of death, and we’ve talked about it quite a lot. We’ve talked about his funeral and what he’d like, I’ve bought the graves and I’m going ahead and planning that.

“If it happens this year, or in five years, and I’m not here myself, one of the children will be able to just take over and join up the dots, because I’d have organised everything.”

As Leigh asked how she’d manage without him, Blanche broke down in tears and replied: “With difficulty, he’s my best friend.”

Are you a fan of Bob Hawke? What did you think of him as prime minister?