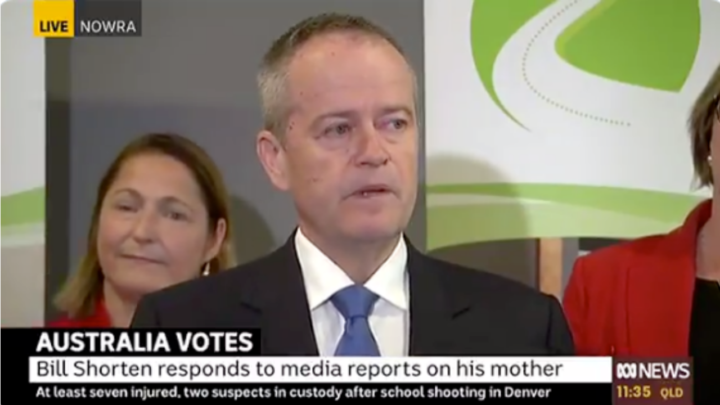 Bill Shorten has fought back tears while addressing the media over comments made about his mother and her career, as he launched into a powerful and moving speech about her struggle to find work in her 50s.

Appearing in front of cameras on Wednesday, the opposition leader singled out newspaper The Daily Telegraph for accusing him of omitting details about his mum’s time working in law during a speech on Q&A on Monday night.

During the segment on the ABC program, Shorten labelled his mum an “inspiration” for holding back her own dreams of working as a lawyer to support her family.

The Daily Telegraph then published an article revealing she did eventually end up working in law later in life, after studying at Monash University, publishing it with the headline: “Labor leader Bill Shorten’s heartfelt story about his mother was missing one vital fact.”

Responding to the report, Shorten, 51, has now appeared in a televised press conference where he gave an emotional speech about his mother and discrimination against older women.

An emotional @billshortenmp has hit back at 'gotcha s**t', after the Daily Telegraph published a story about his mother pic.twitter.com/8SLsb2cB7Z

Trying his best to hold back tears, the politician labelled the recent article “bloody lazy editorial” and “rubbish”.

“Who do some of the lazy people think that they are?” he questioned. “I’ve spoken about my mum at length. I choose to give you that last bit of her battle of her time at the bar because my mum would want me to say to older women in Australia that just because you’ve got grey hair, just because you didn’t go to a special private school, just because you don’t go to the right clubs, just because you’re not part of some back slapping boys club, doesn’t mean you should give up.”

He went on to recall his mother’s struggle to pursue her dream, revealing she had to initially give it up as her family couldn’t afford the tuition fees.

“She had wanted to do law when she was 17,” Shorten said. “She didn’t get that chance. She raised kids.

“She got the best marks. But no-one in my family had ever gone to university. She was very keen to do law. She had a great brain. But a family of four, she was the eldest. She didn’t have the money to pay for her tuition to go to university. So she had to take a teacher’s scholarship.”

He explained she worked as a teacher while raising her kids, before finally enrolling in her 40s. Incredibly, she went on to win the top student law prize, but then faced a difficult struggle to find work as a woman in her 50s.

“She discovered in her mid-50s that sometimes you’re just too old, and you shouldn’t be too old, but she discovered that discrimination against older women,” he admitted.

Calling her the “smartest woman he’s ever known”, Shorten added that it’s his mum that inspires his work as a politician and added: “People say ‘oh, Bill… who are you?’ What I did on Monday night is I explained who I am. I explained what drives me. My mum is the smartest woman I’ve ever known. It has never occurred to me that women are not the equal of men. It’s never occurred to me that women shouldn’t be able to do everything.

“My mum has taught me that what matters in life isn’t how rich you are, or how poor you are. It’s not what religion your worship. It doesn’t matter who you know, what church go to…. It doesn’t matter about your gender — it matters how hard you work.”

It came after he initially took to social media on Wednesday to share a heartfelt message with the public, claiming the article was “political attack” on him and his mother’s memory. The politician labelled it a “new low” and said while his mum did end up going on to work in her dream career, this was delayed as she had faced financial hardship.

“In a new low, The Daily Telegraph has decided to use my mum’s life as a political attack on me, and on her memory,” he wrote on Twitter. “They think they know more about my mum than I do. So let me tell you about Dr Ann Shorten.

“She was a brilliant woman. First in her family to go to university. They weren’t rich. She wanted to do law but had to take a teacher’s scholarship to look after her younger siblings.

“She loved being a teacher and she was very good at it. She later became a teacher of teachers. She worked at Monash University for over three decades, but she always wanted to be in the law.”

Shorten went on to explain that his mother did study law but it wasn’t until she was in her 50s.

“Much later in life, in her 50s, she did just that,” he said. “When my twin brother and I went to university, she was enrolled at the same faculty.

“She finally realised her dream and qualified as a barrister in her late 50s. Mum was never bitter. She had a remarkable life and she felt very fortunate. But because of her financial circumstances, she didn’t get all the opportunities she deserved.”

What did you think of Bill Shorten’s speech?