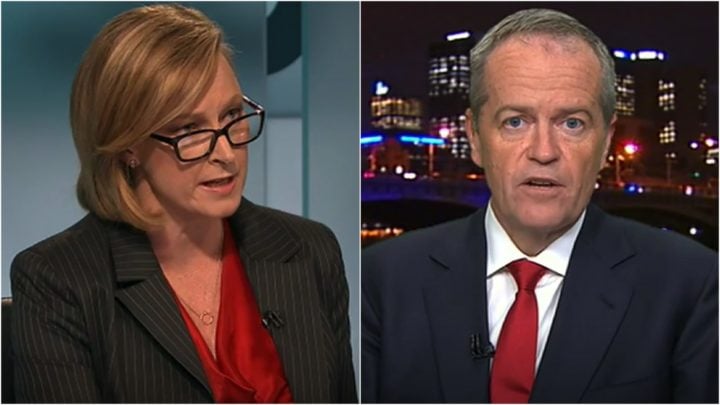 The Labor leader appeared on 7.30 on Wednesday night. Source: Getty.

There are just weeks to go before voters head to polling stations across the country to elect the next prime minister, with tensions heating up between Opposition Leader Bill Shorten and current Prime Minister Scott Morrison as the campaign ramps up ahead of May 18.

The Labor leader appeared on the ABC’s 7.30 program on Wednesday night where he was grilled by presenter Leigh Sales on some of his flagship policies, including franking credits, climate change and negative gearing.

Sales held nothing back as she interrogated Shorten for almost 20 minutes, with the leader of the opposition describing the campaign so far as “dishonest”, adding that a Labor government want to effect “real change” saying: “More of the same under this government isn’t good enough.”

The ABC host kicked off the chat by quizzing Shorten on his climate change policy, asking whether shifting to a low emissions economy would impose a short term cost on the economy in Australia. Shorten deflected by referencing his visit to a steelworks in Whyalla earlier this week, claiming the industry is dependent upon investment in renewable energy.

“Let’s just talk to the two million Australian householders who’ve invested in solar power,” he added. “There is an initial cost, depending on the deals they can get, but most people who go into solar, they don’t go back do they?”

Sales took Shorten’s answer as an admission that there would be an upfront cost, adding: “So if there is a short term economic cost, you have a 45 per cent target for the reduction of greenhouse gas emissions. What will be the cost of that to the economy over the next decade, not in dollar terms but as a percentage of economic growth?”

Shorten replied: “It won’t have a negative effect on economic growth. In fact, most of the mainstream modelling shows that our economy will continue to grow.”

"When you get an income tax credit, when you haven't paid income tax – you're already on the public purse." @BillShortenMP defends @AustralianLabor's #frankingcredits policy. #abc730 #auspol #Ausvotes2019 pic.twitter.com/aVeouEzKQ3

The debate then grew more tense with Sales asking the pollie to “square with voters” the actual cost of the policy, before Shorten insisted that the cost of doing nothing would be greater than any initial cost, cutting Sales off as he continued while the host tried to interject.

“No no, let’s be fair here Leigh. Let’s be fair. I’m not going to get caught up in this government game of gotcha, where you’ve got to invent a number, which you can’t possibly,” he said.

“The reason why the government’s trying to focus on how much it might cost to put in a new renewable energy system is that they’re trying to distract from the fact they have no climate change policy.”

Sales then accused Shorten of “plucking” his party’s 45 per cent target “out of nowhere”, to which Shorten hit back: “Well sorry, I didn’t pluck that out of nowhere, that was the Paris Agreement, that’s what the scientists tell us.”

Talk then turned to the Adani coal mine in Queensland with Shorten saying he will rely on science to make his decision.

The pair then debated Labor’s controversial franking credits policy, which has been slammed by the Coalition as unfairly targeting retirees.

“Mr Morrison has been most dishonest in this,” Shorten told Sales. “He says we’re coming for people’s savings. No we’re not. It’s costing $6 billion, nearly $8 billion a year in the very near future. It is eating the Budget and it is just a gift.”

Sales then diverted the conversation to housing, focusing on Labor’s promise to cut negative gearing, which he says will “create a level playing field” for prospective, particularly first time, home buyers.

What are your thoughts on this story? Will you be voting for Labor at the upcoming election?