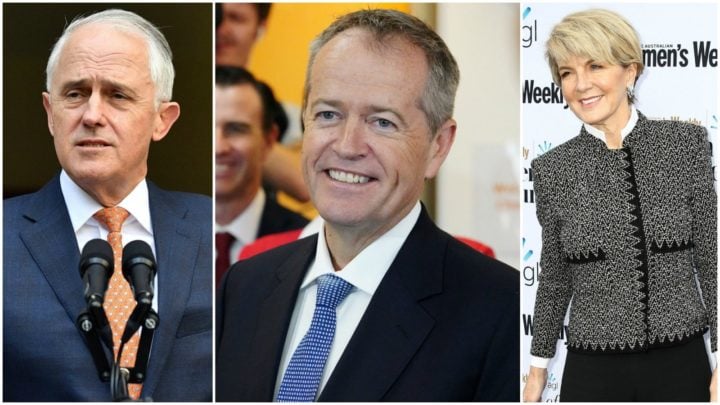 Shorten said the Liberal Party "made a mistake" when they elected Morrison as the replacement for Malcolm Turnbull over Bishop. Source: Getty.

With just three days to go before the federal election, speculation is rife about who might step into some of the top roles if Bill Shorten successfully lands the keys to The Lodge. Now, the Labor leader has revealed some unexpected potential choices if he does succeed Scott Morrison as prime minister.

Speaking on Wednesday, Shorten praised retired Liberal politician Julie Bishop, admitting he would “be happy” to work with her in the future and saying he will talk to the former foreign minister about taking on a job, should Labor emerge victorious this weekend.

“I’m happy to work with her [Julie],” he said, reports The West Australian. “She’s got a lot of things that she wants to do and I don’t want to make her a political issue in this election.

“She’s served this country well. I haven’t always agreed with everything she’s said but I will always rate her very highly for when the plane [MH17] of Australians was shot down over eastern Ukraine.

“I hope that if I was seeing Vladimir Putin, the way she stood up to the Russians, I hope that in the same circumstances I would behave like her.”

He also said the Liberal Party “made a mistake” when they elected Morrison as the replacement for Malcolm Turnbull over Bishop, adding: “When none of her West Australian colleagues voted for her after everything she’s done for them, from fundraising to policy – what (sic) is it so hard about Liberal men to vote for Liberal women in positions of leadership?”

Shorten also, perhaps more surprisingly, had some kind words for his former leadership rival Malcolm Turnbull, describing the former prime minister as a man “with skills”, reports The West Australian.

“(Malcolm) Turnbull, love him or hate him, he’s got skills,” the Opposition leader said. He then added: “The same goes for Julie, the same goes for Kevin (Rudd) and dare I say … John Howard has got something to do for the nation too.

“We’ve got to be better about our former politicians than pushing them onto the scrapheap too much. That will also help us be a less toxic and less partisan nation.”

Shorten was then pushed to say whether he may consider Bishop, 62, as a potential replacement for current US Ambassador Joe Hockey, however he refused to “put a name against a label”.

According to The West, he added: “I’m saying to you quite unreservedly here that I’ve got a lot of respect for her, (my wife) Chloe and I know her well, she’s a good person and we can’t waste talent.”

What are your thoughts on this story? Do you think it’d be good for Australia if the skills of former politicians were utilised, regardless of party allegiances?