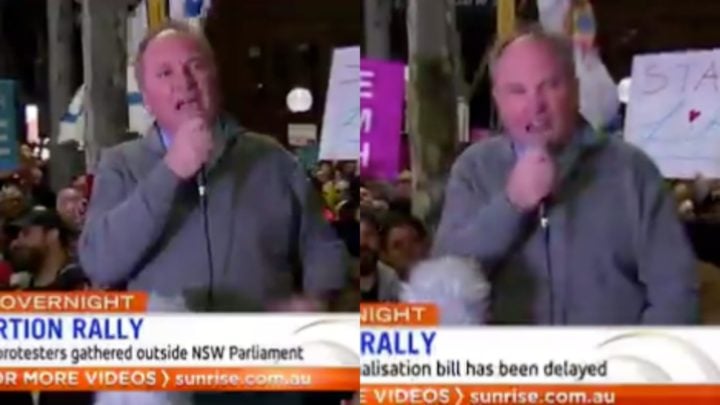 Barnaby Joyce has expressed his views on abortion once again in an angry outburst during a protest outside NSW Parliament on Tuesday night. Source: Twitter/ Sunrise

Pro-life politician Barnaby Joyce led protestors in an angry outburst outside the NSW Parliament this week with a passionate speech condemning possible plans to decriminalise abortion in the state.

The 52-year-old Nationals MP took the streets of Sydney on Tuesday, alongside thousands of Australians, to voice his opinion on the potential changes to abortion legislation after the final vote on the bill in NSW’s Upper House was delayed until next month. Extreme footage shared by Channel 7’s morning program Sunrise on Wednesday morning showed the controversial pollie standing on a platform over the flurry of protestors shouting his views for all to hear.

With signs reading “pro-life” and “pro-child” surrounding him Joyce yelled out: “It was a person and that person has rights, that person does not deserve to die in the corner of a room if it’s born alive. It deserve to be fought for, it deserves to be loved. And if someone says ‘well I want my right to kill that baby’, sorry you can’t have that right.”

The crowd of protestors could be heard cheering in agreement with Joyce with the politician clearly not afraid to share his view on the controversial topic with the rest of the country. The politician has since received a lot of criticism for his actions with many taking to social media to express their thoughts on his attendance at the protest.

“Yet again, I see that Barnaby Joyce angers people,” one person commented on Twitter. “I think that he has a talent for pissing people off.” Another added: “Idiots were still screaming their wild crazy chants at 9pm. Almost violent, nothing logical. Barnaby Joyce has a damned hide even showing up, let alone speaking. No credibility any of them.”

Meanwhile, others agreed with Joyce’s stance on abortion with one person commenting: “Babies should have rights.” And another said: “Someone has to protect the young, good on him.”

This isn’t the first time the former deputy prime minister has been vocal on abortion with Joyce coming under fire earlier this week after Australians received unsolicited anti-abortion robocalls from him. The message from the politician was played on the Today show on Tuesday morning with Joyce heard claiming the proposed bill “legalises abortion for any reason right up to the day of birth”.

“Please don’t #robocall me @BarnabyJoyce,” one person wrote on Twitter. “You have no authority on the NSW legislation regarding abortion. Your opinion has been weighed, measured, and found wanting.” While another said: “Who paid for @BarnabyJoyce to robocall us in NSW with false information about abortion? No woman wants to answer her phone & hear a man at the other end spewing that vile misinformation.”

NSW residents are blasting Barnaby Joyce this morning after receiving an unsolicited anti-abortion robocall from him. #9Today pic.twitter.com/NRAcAhAMiq

This followed a post on social media earlier this month from Joyce who wrote on Twitter: “I have a real problem with a law that allows a perfectly healthy full-term baby to be aborted because two doctors say it’s okay, yet NSW’s legislation allows exactly this.” The politician also asked for followers to sign a petition with Support Life to demand a proper inquiry into the matter.

Meanwhile, Joyce also delivered a passionate speech in parliament in which he referenced the rights of his baby son to slam the bill and what it means for those around NSW. “On the 1st of June, Vikki’s and my son Tom took his first breath. This was not the start of his life,” the former deputy prime minister explained. “The reality is he was part of this world for some time and was merely passing from one room to another.”

I have a real problem with a law that allows a perfectly healthy full-term baby to be aborted because two doctors say it’s ok, yet NSW’s legislation allows exactly this. Sign the petition at https://t.co/tx5oqQiG8D to demand a proper inquiry.

Joyce argued his son had rights long before he was born and no person, doctor or parliament, had the power to take that away. “Inside the womb, Tom kicked, punched, grabbed his umbilical cord, felt pain, slept and dreamed,” he added. “With ultrasound he was most certainly seen in real human form. To say he didn’t have the rights of other human life is to say he must be sub-human.”

He continued: “I don’t believe that any person, any doctor, any parliament, has the power today to declassify another person as less than human, and by so doing removing their fundamental right to be alive. In the NSW parliament they are debating whether Tom had no classification of human rights. Whether before his umbilical cord was cut, he was subhuman.”

Do you agree with Barnaby Joyce's views on abortion? Or do you think abortion should be decriminalised in NSW?