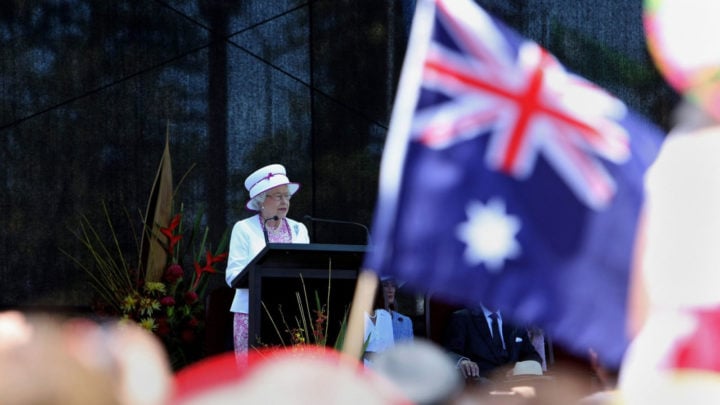 The Australian Republic Movement launched a new campaign on Tuesday to remove the Queen as head of state. Source: Getty.

Prince Harry and Meghan shocked the world this month as they made the unprecedented decision to wave goodbye to the lives as seniors royals and embark on a new adventure in North America, and now The Australian Republic Movement (ARM) has made fresh calls for Australia to do the same and cut ties with the monarchy.

Fresh off the back of ‘Megxit’, the ARM launched a new campaign for a homegrown head of state on Tuesday, as the group blamed “division among supporters” for the failure to establish the country as an independent republic thus far.

A constitutional referendum on the subject of independence from the British monarchy was defeated in 1999, when 12.3 million people had their say on the matter, and ARM National Director Sandy Biar said that a national vote on the issue will continue to lack support “until we come to an agreement about the way forward”.

While Peter FitzSimons, chair of the ARM, said: “This is a bold new approach which emphasises that we have far more uniting us as Australians than we have dividing us. Almost all Australians who support our independence from the British Monarchy agree on the fundamentals of those reforms, and it’s now time we draw a line under the differences of the past and work together to build consensus around a proposal for change.

“This is long overdue. This is a decision that we as Australians must make for ourselves. Do we want to be independent? Then let’s work together to make it happen.”

The lobby group are now inviting supporters of the movement to make submissions on what they believe would be the best way forward, as part of an 18-24 consultation period to develop a model for independence. The ARM would then lobby for this proposal to be put to a national vote.

The issue of whether Australia should remain as a realm of the Commonwealth with Her Majesty the Queen as head of state is often debated. Last year Starts at 60 readers took part in an online poll and had their say on whether they think Australia should follow in the footsteps of the likes of Singapore and Samoa, who have previously parted ways with the Queen as their leader, but remained within the Commonwealth of Nations.

An overwhelming majority of respondents voted against the notion of an Australian Republic led by an Australian Head of State, with the most popular reason for wanting to remain under the rule of Her Majesty Queen Elizabeth II being a lack of faith in the country’s top politicians.

Eight out of 10 respondents voted in favour of remaining part of the Commonwealth under the rule of Queen Elizabeth, while just 20 per cent said they would prefer to have an elected Australian as the head of state.

Many of those who voted against the election of an Aussie head of state shared their reasons, as reader Cyn Wray said: “Well imagine being a Republic and having a Donald!” Phyllis Hunt commented: “With the quality of our politicians, I would hate to see who would be selected as president.” While Lisa Drury Hudson wrote: “Why would we need to change something that works and is not broken.”

“Can you imagine Shorten or Turnbull as President No way,” said Susan Weston and Eunice Helmore said: “The problem is I would hate to see what we would get as an Australian Head of State. President material we have none.” And Valerie Bush wrote: “Not because I love the Royal family but because the system has served us so well.”

As Head of the Commonwealth, the Queen reigns over 16 of the 53 member countries, including; Antigua and Barbuda, Australia, The Bahamas, Barbados, Belize, Canada, Grenada, Jamaica, New Zealand, Papua New Guinea, Saint Kitts and Nevis, Saint Lucia, Saint Vincent and the Grenadines, Solomon Islands, Tuvalu, and the United Kingdom. However she does not rule as monarch of the majority of the Commonwealth nations, known as ‘republics’.

Do you think Australia should become a republic? Would you prefer a homegrown head of state?