Does Scott Morrison’s win discredit the polls? How they got it so wrong 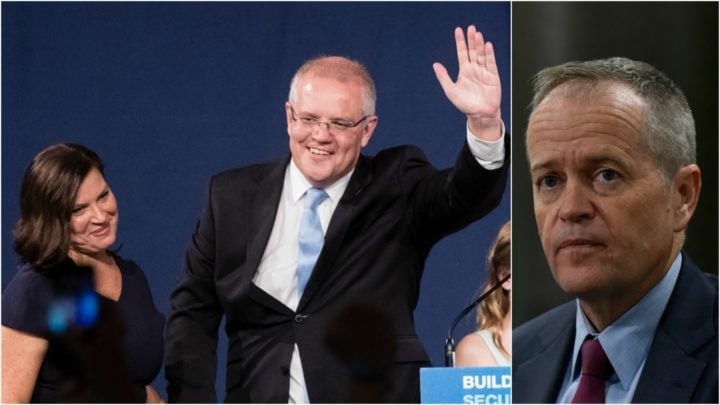 A Channel 9 exit poll predicted Shorten would be prime minister just hours before the result was announced. Source: Getty.

In the months leading up to Saturday’s federal election, countless polls were published regularly in the media predicting the likely outcome of the public vote as the nation edged closer to May 18. In fact, in the two years prior to the election, the Coalition didn’t win a single Newspoll.

For months Labor have been leading on a two-party preferred basis, despite Scott Morrison remaining as preferred prime minister over the Labor leader. Even the final polls, which were published just hours before polling stations opened, seemed to suggest that a Labor win was imminent.

Channel 9 even published an exclusive YouGov Galaxy exit poll at around 9am on Saturday morning which predicted that Shorten was still on track to defeat Morrison and claim the keys to The Lodge, reporting that Labor were leading the Coalition 52 per cent to 48 per cent on a two-party preferred basis.

However these statistics were then rubbished less than 24 hours later when Scott Morrison emerged victorious and was returned to power as prime minister, heralding the LNP’s win as a “miracle” during his victory speech in the early hours of Sunday morning.

Now, as the dust settles and the final votes are counted, Aussies are questioning how the polls could have gotten it so wrong and whether Aussies should rely on them in future.

Even the exit polls were wrong. https://t.co/7v7zYlevnN

A nationwide debate has now been sparked on the topic, with 9News‘ political editor Chris Uhlmann claiming there are now “serious questions about conducting polling”.

“Are people telling pollsters what they actually think?” he told 9News. “The other problem we have got now is a move to mobile phones. Once upon a time people used to wait by the landline and answer people’s questions dutifully. You can avoid phone calls now.”

The Studio 10 panel got involved with the discussion too as Angela Bishop slammed the effect that poll results have had on Australian democracy in recent years.

“Every single poll wrong and for years,” Bishop said during Monday morning’s episode. “What that has shown, we tossed out every single prime minister, this disastrous revolving door of prime ministers and each time the polls were cited as the reason. Malcolm Turnbull said ‘Tony Abbot’s lost this many polls he’s got to go’.

“And then the media just waits for those poll results to start talking about leadership destabilisation because they know it’s happened before and chances are it’ll happen again.

“This reliance on the polls has been destroying our democracy. It has been disabling politicians from being able to commit to big picture policy … because at the first sign of a bad poll, their party turfs them.”

If opinion polls were simply inaccurate (as Anthony Green suggests) you would expect all of them to point to different results, and for one result to differ to the next. To have them broadly consistent, but wrong, seems to point to very tightly targeted campaigning.

Read more: Bill Shorten on track to be next PM as Labor edge ahead in last Newspoll

Members of the public have slammed the incorrect polls too, with one disgruntled voter tweeting: “This is the end of opinion polls. It’s over.”

Another suggested that the polls were actually part of a campaign, rather than simply incorrect, writing: “For all opinion polls to be so badly wrong and to be consistently wrong in the same direction seems to point to such a targeted campaign. Opinion polls will not pick up trends in targeted campaigns.”

While a third wrote: “The widespread fury and vitriol across social media right now shows why the polls were so wrong. Most people are genuinely afraid to say they vote liberal as much of the ‘left’ are hysterical, hypocritical, aggressive lunatics.”

What are your thoughts on this story? Were you surprised by the election result?