‘I’m onto you’: Albo and Dutton clash in fiery debate over AFP media raids 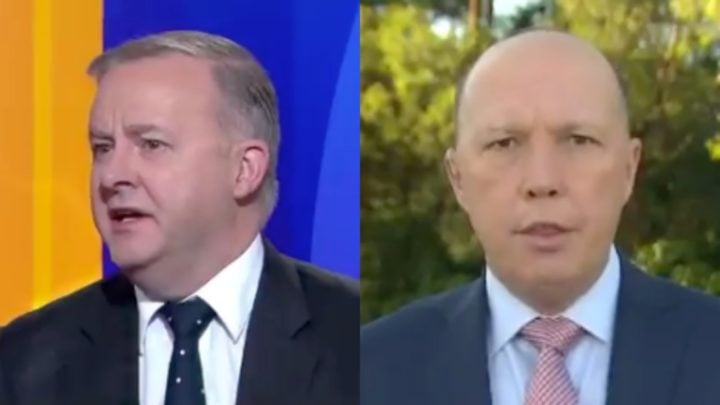 Anthony Albanese and Peter Dutton clashed in a heated discussion on the AFP media raids. Source: Twitter/ The Today Show

Labor leader Anthony Albanese and Home Affairs Minister Peter Dutton have come to blows in a heated debate over the recent raids on media this week, with the politicians pointing fingers at each other in a fiery segment of the Today show.

The rival politicians were invited to the Channel Nine program to discuss the Australian Federal Police’s controversial decision to raid the Canberra home of a News Corp journalist and the ABC‘s Sydney newsroom this week – and it didn’t take long for the two to lock horns.

It was initially set off when newly appointed opposition leader Albanese questioned the government for its role in the raids and Australians’ thoughts on the process.

“Australians are concerned that media’s capacity to scrutinise government is under threat,” Albanese said. “What we are seeing here is no one in the government being prepared to defend that role that media has in our democracy.”

“I’m targeting you buddy, you’re the government.” @AlboMP denies he is blaming the AFP for raids on the media, putting the onus on the government and @PeterDuttonMP. #9Today pic.twitter.com/wvIJIbpPd1

It was at this point that Dutton fired back, accusing Albo of attacking the federal police officers who were involved in the raids.

“We have laws that operate in this country and the Federal Police, who have been criticised by people, including Albo, which I think has been quite unfair to target those officers individually,” the politician said, prompting Albo to hit back: “I’m targeting you buddy… You’re the government.”

Directing his words straight at Albanese, Dutton added: “You are criticising police officers.”

It didn’t end there with the former Queensland police detective repeating his claims against Albo.

“I heard your words,” he said in an accusatory tone. “You were criticising the individual police officers. Even the police union has been horrified at the words you said.”

The back and forth exchange continued as Albanese denied the claims and insisted once again that Dutton is to blame and not the police officers who undertook the raids throughout the week.

“That’s not true,” Albo insisted. “I don’t even know who they are mate. I’m on to you, you’re the government.”

Throughout the week, a raid was carried out at the home of journalist Annika Smethurst after she wrote an article over a year ago about the the government’s supposed plans to spy on Australians, Nine News reports.

Meanwhile, the ABC offices in Sydney were also raided for publishing a story back in 2017 alleging Australian soldiers had committed war crimes in Afghanistan.

Journalists involved in the stories could face charges for their articles. On Thursday night News Corp Australasia Executive Chairman Michael Miller spoke out about the incidents, claiming they’re a “danger to democracy”.

“The issue is not just these recent raids but the growing number of laws with the power to put journalists in jail,” he said according to Nine News.

“It is a danger to our democracy when professional news reporting is at risk of being criminalised.”

Miller added: “The times we live in demand great examination of issues that affect all Australians, not less. We stand by both our reporting and Australia’s right to know.”

Have you been following this story? What are your thoughts on the recent media raids?