‘Don’t give the Libs your vote’: Aussies hit by Robocalls from Turnbull’s son 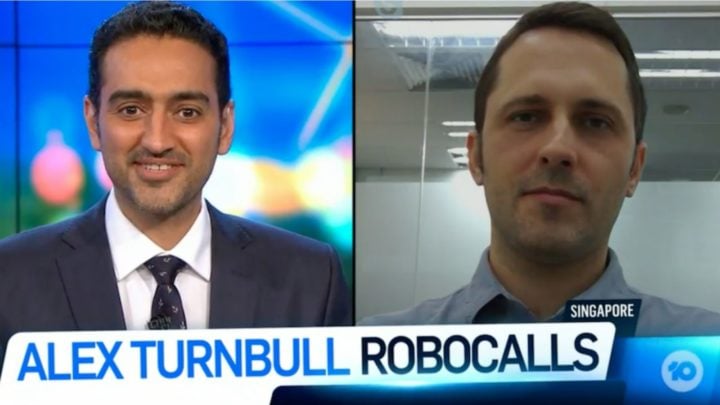 Alex Turnbull appeared on The Project where he explained why he was speaking out against the party his father once lead. Source: The Project

The advertising blackout for the federal election may be underway but around 17,000 people are expected to receive a robocall from political lobby group GetUp before Australians head to the polls on Saturday. For some of the calls, Alex Turnbull – better known as former prime minister Malcolm Turnbull’s son – will encourage the public not to vote for the Liberal Party.

While the campaign will target a number of seats around the country, the Victorian seat of Flinders – currently held by Health Minister Greg Hunt – is one of their main targets. Independent candidate and former Liberal member Julia Banks is also running for the seat.

Appearing on Thursday’s episode of The Project, Alex shared the recording with viewers and the show’s panellists, insisting voting against the party his father once lead was the right thing to do.

The Project host Waleed Aly questioned whether the robocall campaign was “wrecking”, “sniping” and “undermining”.

“Well, I made no undertakings to not do that, so that’s not really a credibility issue on my side,” Turnbull said.

Despite the criticism that people don’t like robocalls, Turnbull claimed many people weren’t compulsively online or on social media who may have ignored political messages.

“For those people, it’s good to get the message out,” he said. “For those who feel they’ve had enough of this election already, you are free and are capable of any time at hanging up.”

Host Gorgi Coghlan said GetUp could have asked anyone to record the message and questioned why they asked the son of the former PM to do it.

“I think the problem is getting people who are current or former members of the Liberal Party – certainly current members – to go on the record about their dissatisfaction about the state of the party and their policies is generally hard,” Turnbull explained. “But I’ve taken the view that if you don’t actually push back and you allow the far-right of the party to wreck, snipe, undermine and engage in more or less acts of terrorism, then you’re going to just basically allow them to win.”

He added it was necessary for someone to push back against the far-right of the party and that if someone else had volunteered, he would’ve let them do it. Turnbull also confirmed that his father wasn’t involved in the campaign and that he didn’t know about the message until it was recorded and passed on.

“He gets warnings before he gets calls from journalists and nothing else,” Turnbull said.

Read more: Move over ScoMo: Australia’s ‘most trusted’ pollie revealed ahead of election

He also confirmed his father “wasn’t enthusiastic” about his involvement in the campaign, but was aware there was nothing he could do about it.

What do you make of Alex Turnbull’s robocalls? Do you think he should be campaigning against the party his father once lead? Do you know who you’re voting for at the election?