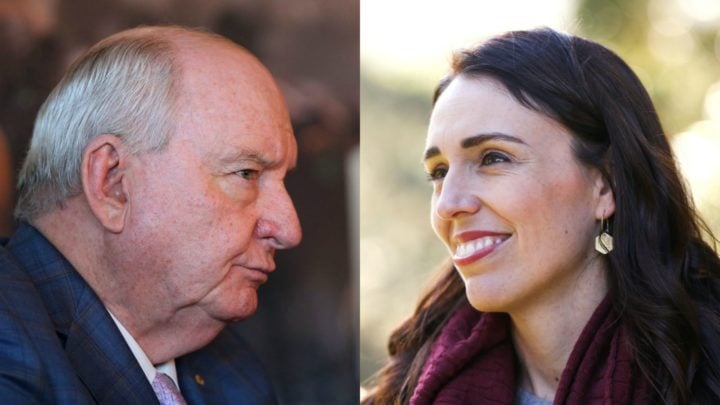 Alan Jones has launched a sensational rant at New Zealand Prime Minister Jacinda Ardern after she criticised Scott Morrison’s stance on climate change, branding her a “complete clown” and demanding Scott Morrison “shove a sock down her throat”. Speaking at this year’s Pacific Island Forum, mother-of-one Ardern said Australia would have to “answer to” the rest of the Pacific.

“Every single little bit matters. So that is why New Zealand has joined that international call. That is why we speak, I believe strongly on the international stage around these issues,” she said to reporters in a video shared by Nine News online. “But ultimately we all have to take responsibility for ourselves … Australia has to answer to the Pacific. That is a matter for them.”

Jacinda Ardern has firmly put Scott Morrison in his place, as the New Zealand Prime Minister spelt out what she thinks Australia should do about climate change. #9News pic.twitter.com/lZs4ENbUiD

Jones has since slammed the New Zealand prime minister, saying “she’s a complete clown”.  Addressing the comments on 2GB this morning, the radio shock jock said: “Here she is preaching on global warming and saying that we’ve got to do something about climate change. If you want to talk about the figures… the fact is New Zealand’s carbon dioxide has grown by 10.8 per cent per capita since 1990. Ours has grown by 1.8 per cent.”

Rushing to Morrison’s defence, the radio presenter then urged the prime minister to “shove a sock down her throat”, adding: “I just wonder whether Scott Morrison is going to be fully briefed to shove a sock down her throat. She is a joke this woman, an absolute and utter light-weight.” He added: “These people are an absolute joke and Jacinda Ardern is the biggest joke.”

In a Facebook rant, Jones went on to criticise Ardern, saying New Zealanders prefer Morrison to herself and labelled the prime minister a “lightweight”.

“There’s a headline story today where this lightweight New Zealand Prime Minister Jacinda Ardern is challenging Scott Morrison over climate change,” he wrote on social media. “But I hope Scott Morrison gets tough. He has a stack of staff. Someone should have to him a full briefing.”

Jones stated that New Zealand’s carbon dioxide levels have grown by 10.8 per cent since 1990, while Australia’s have only risen by 1.8 per cent. “Now I don’t have a problem with carbon dioxide,” he explained. “It’s only these swallowers of the hoax that seem to be worrying. But if they want to make it an issue, they had better live with the facts.”

The radio personality also pointed out the number of Kiwis living in Australia, adding: “According to the latest Bureau of Statistics figures there are 568,000 New Zealanders in Australia, or more than double the total three decades ago. So more than 11 per cent of the Kiwi population lives in Australia.”

He continued: “Statistically we have five times New Zealand’s population but only 38,600 Aussies live in New Zealand. We have almost 15 times that number of Kiwis living here. Presumably they prefer Scott Morrison to Jacinda Ardern. That would be no surprise.”

This isn’t the first time the New Zealand PM has criticised Australia’s stance on a particular issue. During a joint press conference with Morrison in Auckland earlier this year, the prime minister insisted that while she agrees with Australia’s policy to “take a dim view of newly arrived non-citizens committing crimes”, she said New Zealanders who have spent most of their lives in the country and have little or no connection to New Zealand anymore shouldn’t be treated as harshly.

“As in any family it is inevitable that occasionally we will see things differently,” Ardern said in front of the reporters. “We had a frank discussion about New Zealanders who have made their homes in Australia and how they can be given opportunity to live and thrive.” She added: “We talked about deportations of New Zealanders. In my view, this issue has become corrosive in a relationship over time.”

While Ardern said that she understands the treatment of newly arrived non-citizens, she added: “The New Zealand people have a dim view of the deportation of people who move to Australia as children and have grown up there, with often, little or no lasting connection to here. It is a matter we will continue to discuss.”

What are your thoughts on this? Do you agree with Alan Jones? Or do you think his comments are too harsh?