‘I cop all this sh**’: Pauline Hanson breaks down in emotional interview 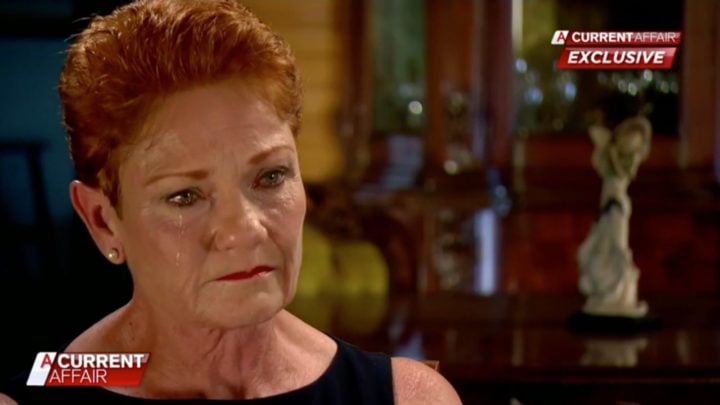 Pauline Hanson burst into tears during her interview with Tracy Grimshaw and questioned why other political parties were so frightened of One Nation. Source: A Current Affair

One Nation leader Pauline Hanson broke down in tears during an emotional interview with A Current Affair’s Tracy Grimshaw on Tuesday night following yet another blow for her political party.

Hanson revealed in a press conference on Tuesday that Dickson had resigned, before criticising her former colleague’s language and behaviour. It also followed the release of footage earlier this year which appeared to show One Nation Chief of Staff James Ashby and Dickson lobbying for cash donations of up to $28 million from the National Rifle Association of America (NRA).

Before footage of the interview aired, Grimshaw described Hanson as “cranky” and sometimes emotional”.

“I’ve worked at this for 23 years since I was first elected to parliament in 1996. I’ve had my ups and downs with this and I feel I just keep getting kicked in the guts time and time again and it all happens right before an election,” Hanson explained.

She questioned why tapes were held for seven months before they were released, questioning whether Channel Nine paid for the shocking footage. Grimshaw confirmed the footage was leaked to the network and that they didn’t pay for it.

Hanson said she was “disgusted” by the vision but claimed the footage was a “sting” to bring One Nation down.

“Why is everyone so frightened of One Nation?” she asked.

The 64-year-old denied she asked the NRA for political donations and said she “worked her guts out” to get change in this country.

“I’m not getting in bed with a gun lobby,” she said, becoming angry. “How much do I have to tell you this? I don’t care what these two guys said. I’m the leader of this party, not them and I’ll make the final decisions as I always have done.”

“Do you think I’m going to stop fighting for the Australian people?” she later asked Grimshaw, fighting back tears. “I see that farmers have been forced off their lands, kids (with) no hope for a future. People are hoping and praying that I’m going to be the voice for them.

“And I cop all this sh** all the time and I’m sick of it. Absolutely sick of it.”

She said other politicians sailed through controversy while people continue to give her “a kick in the guts”.

Hanson did admit that she was “let down dreadfully” by a list of people but has stuck with politics because she believes in making a change for the people. Grimshaw questioned why Hanson was still in politics.

“I’ve made a change for people,” Hanson sobbed. “There’s still a lot I want to do and a lot I need to do and there’s so much poverty out there and people who are hurting and at the end of the day, these politicians, these members of parliament, both major political parties, they don’t give a damn about the people.”

Later in the interview she said that she’s got at least three more years in politics and that she will continue to deal with the whole situation. She said she knew nothing about Dickson’s scandal and that he’d let her down. Hanson also confirmed he apologised and was upset with himself.

Who will you vote for at the next election? What did you make of Pauline Hanson’s interview?