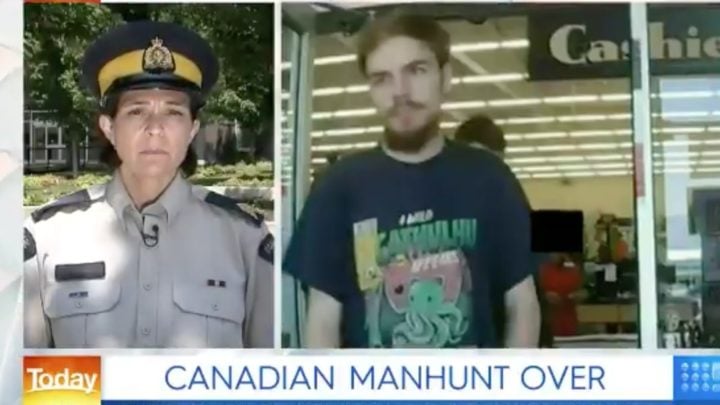 A day after two bodies believed to be those of the teen fugitives accused of killing Aussie man Lucas Fowler and his American girlfriend Chynna Deese were found in Canada, authorities have given the public an update on what happens next. Source: Twitter.com/TheTodayShow

Canadian police have broken their silence for the first time since two bodies were found in Canada on Thursday, believed to be that of alleged teen fugitives Bryer Schmegelsky, 18, and Kam McLeod, 19.

Speaking to Georgie Gardner on Friday’s episode of Today, Sergeant Janelle Shoihet couldn’t officially confirm that the body’s found were those of the teens suspected of killing Australian man Lucas Fowler and his American girlfriend Chynna Deese.

“At this point, no, we’re not able to officially confirm,” Shoihet said. “We’re awaiting the autopsy results which are being conducted in Manitoba.”

Shoihet didn’t have a timeline as to when the information would be available to the public, but confirmed that it would be released as soon as authorities had it. Authorities are also not yet able to verify exactly how the suspects died, with Shoihet explaining: “It really will be up to the chief medical examiner in Manitoba to make those determinations and I can’t speak to what the evidence showed when the bodies were transported because in some cases, they cannot definitively define how they died.

“They can certainly make some educated guesses, but they may not be able to definitively say.”

Canadian authorities are awaiting autopsy results to confirm the identities and cause of death of two bodies believed to be Bryer Schmegelsky and Kam McLeod. #9Today pic.twitter.com/gIijL0B3zy

During the interview, Shoihet also confirmed that while Australia and the family of the victims want answers, we may never know the motives behind the murders.

“That’s one of the questions I know that’s been weighing not only on the minds of the families, but also on us here in Canada and Canadians and our American friends as well,” she said.

“Given that now we believe the suspects are deceased, it does complicate things for us because while we still have some evidence we’re able to gather and my understanding is investigators will be at the scene in Manitoba gathering some more evidence there and looking at the crime scene there … The truth is at this point we may never know.”

Shoihet said that authorities still need to determine conclusively that there are no other crimes that the two suspects could be linked to, relying on potential information and tips from locals. She explained: “We still have to go through the process of going through those to make sure that we have crossed every ‘T’ and dotted every ‘I’ and that we have concluded definitely that they are not linked to any other crimes in their path from BC and travelling to Manitoba.”

The Royal Canadian Mounted Police (RCMP) said in a statement on Thursday that the bodies believed to be those of Schmegelsky and McLeod were discovered near the shoreline of the Nelson River, close to a burnt vehicle and just 1km from where they found a series of items linked to the teens at the weekend. They added that the items recently found by the riverside were vital clues that helped them narrow down the search considerably, explaining on Twitter: “Our officers knew we needed just one piece of evidence to move the search forward & on Friday, August 2nd, the items found on the shoreline of the Nelson River & directly linked to the suspects, enables officers to narrow down the search.”

The search is over.  At 10am this morning, Manitoba RCMP officers located the bodies of two males, believed to be the BC suspects, near the shoreline of the Nelson River (approx 8km from the burnt vehicle). #rcmpmb pic.twitter.com/tZ7EBFsNDr

The discovery followed weeks of searching for the two men, while the family of Fowler released a statement when he was murdered.

“We have lost our dear Lucas Fowler, son, brother, grandson and friend in the most terrible of circumstances. To lose someone so young and vibrant, who was travelling the world and just enjoying life to the full, is devastating,” the statement, released via NSW Police, said. “To know his beautiful girlfriend, Chynna Deese of Charlotte, North Carolina also lost her life in this violent event is too cruel. All our love and best wishes go to Chynna’s family and friends.”

The family thanked everyone for their love and support.