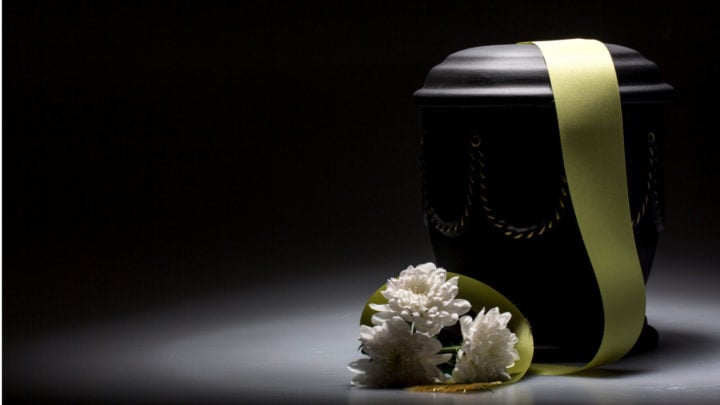 A man has been accused of flushing his own grandparents' ashes down the toilet. Source: Getty

An American man has been accused of flushing his own grandparents’ ashes down the toilet in a terrible act of revenge against his mum.

Thomas Porter Wells, 33, allegedly had a falling out with his mother and was kicked out of home due to his supposed drinking and drug use, the Trib Live reports.

McKeesport Police reportedly confirmed that Wells had been living at the residence for a brief time but left after the argument. Shortly after, the man’s mum Denise Porter reportedly went to the police claiming a relative had told her that Wells had flushed the ashes of her parents down the toilet before moving out.

According to a criminal complaint obtained by the Trib Live, the ashes had been kept in a box in Porter’s room and she had feared it was her own son who had disposed of them.

While Wells is said to have denied doing so in a phone call with his mum, it’s alleged in the complaint that he then sent a text message to Porter claiming he would flush her ashes down the toilet after she died.

Despite his claims he didn’t play any part in the alleged crime, Wells faces being charged with two counts of abuse of a corpse and one count of criminal mischief. He is scheduled to appear in court on May 13.

It comes just a month after a grieving mother broke down in tears on television as she described the heartache she felt after her late son’s girlfriend refused to hand over his ashes, describing the woman’s alleged actions as “inhumane” and “unfair”.

Helen Bennett appeared on Channel Nine’s A Current Affair, alongside her daughter Amanda, just weeks ago where she claimed she was locked in a bitter dispute with her deceased son’s partner Sheree Brown – with the woman said to be withholding his ashes from Shayne’s family.

“It was bad enough just losing my son,” she said. “Then to have someone who is so nasty and cruel to do this to us is just wrong. It’s just not fair. She may have his ashes but I know where he is, he’s here in our heart.”

Wiping her eyes, Helen added: “There’s no words can describe her. It’s inhumane. The one person she’s hurt is my son and she says she loved my son, she’s lying. No one would do this to anyone.”

Shayne dated Sheree for six years, with their relationship falling within the legal limits of a De Facto relationship, despite Shayne having moved back in with his mum in Tuncurry November last year after Sheree was jailed on shoplifting charges.

One week after Shayne passed away on New Year’s Eve 2018 – having passed out drunk and failed to wake up – Sheree was released from jail. Despite a promise from Helen that Sheree could share his ashes and help with the funeral plans, she is reported to have made a successful application as his next of kin to have his body released to her, before holding her own funeral and having him cremated.

Have you ever had problems with family members involving a loved one’s ashes?