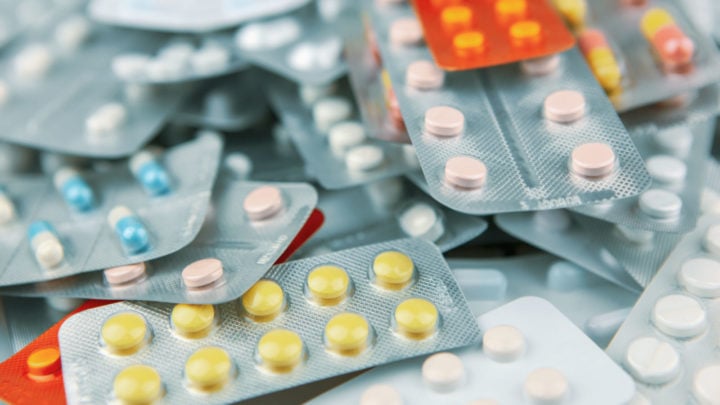 The PSA said the restrictions are necessary to prevent shortages. Source: Getty.

Pharmacies across Australia are now required to restrict the amount of medicines they dispense as panic buying continues to put a strain on the country. Australia’s Deputy Chief Medical Officer Paul Kelly issued the plea this morning as he delivered an update on Covid-19.

The federal government has now implemented national restrictions on prescription medicines, with Kelly advising that people will now only be able to receive one months supply at the dose prescribed by a GP.

Restrictions are also being placed on the sale of over-the-counter medicines such as Ventalin (and other salbutamol inhalers for those with asthma) and paracetamol, with shoppers now only able to get their hands on one unit per purchase. While children’s medications, such as Panadol syrup, now have to be moved behind the counter.

Speaking on Thursday morning, Kelly said: “There have been reports of people buying large quantities of these medications over the last few days. I recognise again that people are fearful about issues, particularly those that might affect their own families.

“But I say again, as the Prime Minister said yesterday about panic buying, please do not buy more than you need.”

He also pointed out that suppliers are required to notify the government if they are experiencing shortages of any medication, and stressed that no suppliers have yet done so.

Professor Chris Freeman, president of the Pharmaceutical Society of Australia (PSA), said limiting the dispensing of prescription and over-the-counter products to one month’s supply was necessary to address the issue of people stockpiling medicines due to the current COVID-19 pandemic.

“The Government has made it clear to the public that it is critical to stop stockpiling medicine to protect the access of medicines to all Australians,” he said. “Demand for medicines has increased considerably in response to the COVID-19 pandemic which has the potential for numerous product lines to be out of stock and some pharmacists are being pressured and abused to provide unsafe quantities of medicine.”

Kelly’s plea comes after NPS MedicineWise issued advice around stockpiling medication, recommending that people should not purchase more than one month’s supply.

“However, there is no need to stockpile large quantities of medicines you or your family take. Having much more than a month’s supply of medicines is generally not necessary and comes with extra costs and medicine safety risks.”

The deputy chief medical officer also offered five simple tips for minimising the spread of the virus and asked people to ensure they are washing their hands properly and often. He also urged people to cough or sneeze into their elbows, avoid touching their face and to practice social distancing when out in public.

Are you worried about medicine shortages? Do you think limiting prescriptions is a good measure?