Can your pets contract coronavirus? 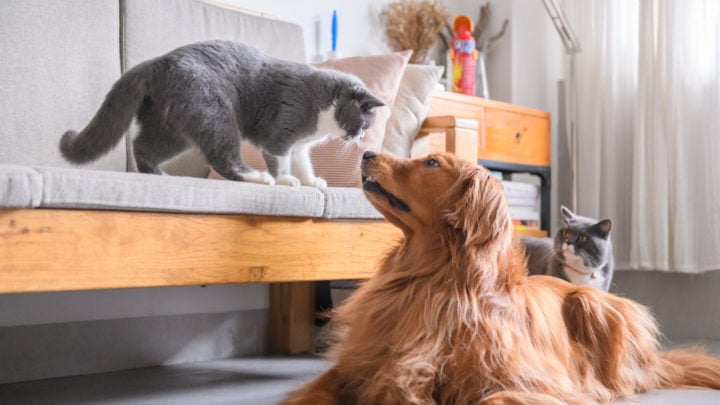 After a dog had a confirmed case, pet owners are wondering if they should be worried. Source: Getty.

As the pandemic continues to sweep the nation and an increasing number of people are retreating indoors to protect themselves, many Australians will be spending more time with their furry friends. But the immediate concern self-isolation raises for many animal lovers is whether or not pets are susceptible to Covid-19 and what pet owners should be doing to prevent any risk.

A comforting statement from the RSPCA has reassured the public that there is no risk of contracting the novel coronavirus (Covid-19) from companion animals. It also stated that, as far as experts know, pets face no actual threat from the virus itself.

The charitable organisation announced that, currently, the spread of the virus is known to be the result of human-to-human transmission of a novel coronavirus known as SARS-CoV-2.

“To date, there has been no evidence that companion animals play a role in the spread of this human disease or that they become sick if they are exposed to the virus,” the statement read.

Since the start of the coronavirus crisis in January, there have been two known cases of the virus being detected in a domesticated animal, both of which occurred in Hong Kong. The first case was a 17-year-old pomeranian who unfortunately passed away earlier this week, however the cause of death remains unknown as the owner refused to allow authorities to conduct an autopsy.

However, vet Dr Claire Stevens assured panicked pet owners that the threat of transferring the virus from human to animal is currently non-existent and that although the dog was found to have a ‘weak positive’ to Covid-19, it does not mean it was suffering from the illness or was contagious.

Stevens reminded pet owners to continue taking extra precautionary measures for the safety of themselves and their pets, including washing hands thoroughly and avoiding contact with the face. She also added that being infected does not equal being infectious when it comes to the capability of animals spreading the virus.

Additionally, the RSPCA announced that the advice regarding the low level of risk involved is not only exclusive to domesticated animals such as dogs and cats, but it can also be extended to cover farm animals and other wildlife as there is currently no evidence supporting the idea that they are a threat to spreading this particular strain of the virus.

Medical experts have assured the public that there are different types of coronavirus. This means that any cases that have been detected in dogs (particularly greyhounds, as reported by several media outlets) and cats are actually referring to a distinctly different virus type to the one that is causing the human disease.

As the virus type affecting animals poses no known risk to humans, the RSPCA is reminding people that there is no need to be concerned about having contact with companion animals as a result of the ongoing outbreak.

Where you worried about your pets contracting the virus? What are you doing to protect yourself?