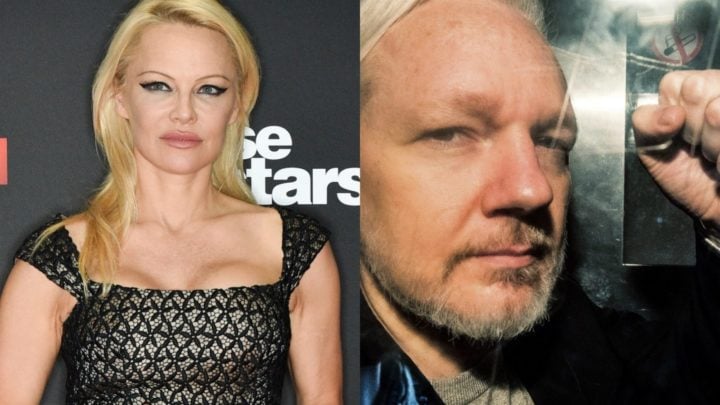 Former Baywatch actress Pamela Anderson has once again declared her support for WikiLeaks founder Julian Assange after visiting him in a London prison on Tuesday.

“He does not deserve to be in a supermax prison. He has never committed a violent act. He is an innocent person,” Anderson told reporters outside Belmarsh prison, according to the ABC.

She said Assange has been “cut off from everybody,” including his children, and does not have access to any information.

“He’s a good man, he’s an incredible person, I love him and I can’t imagine what he’s been going through,” Anderson added.

I look like a judge.
If I were a judge, the world would be paradise @FollowWestwood #saveassange
Justice depends on public opinion – I’m supporting my friend #julianassange in my #johnlilburne inspired cloak – pic.twitter.com/uxOvSNSLj2

The former model also hand-wrote a letter addressing the situation and shared it to social media. It read, in part: “He is treated as the most dangerous man in order to make him a criminal without him ever having done anything whatever wrong… People don’t even know why they’re mad at him. They say he’s bad. Justice depends on public opinion.”

Julian Assange is the world’s most innocent man. pic.twitter.com/wC1NPDjJAG

He is currently serving a 50-week jail sentence for breaching his bail conditions when he fled to the Ecuadorian Embassy in 2012.

The 47-year-old appeared in a UK court last week where he was sentenced to jail over the bail breach which took place seven years ago, the BBC reported. Assange had reportedly been hidden away in the embassy since then to avoid extradition to Sweden to face questioning in a sexual molestation case.

However, last month that all ended when he was taken into custody and arrested by Metropolitan Police for failing to surrender to the court back in 2012. He was further arrested on behalf of the United States authorities after arriving at the central London police station in relation to an alleged conspiracy with Chelsea Manning.

While the matter of the bail breach has been concluded Assange still awaits charges for the alleged WikiLeaks conspiracy in which more than 700,000 confidential documents were disclosed.

According to the BBC he could face five years behind bars in the US if convicted of the crime.

The latest court proceeding follows Assange’s dramatic arrest at the Ecuadorean embassy in April. In a statement released by Metropolitan Police Services at the time, it was confirmed officers were invited into the embassy “on behalf of Westminster Magistrates’ Court”.