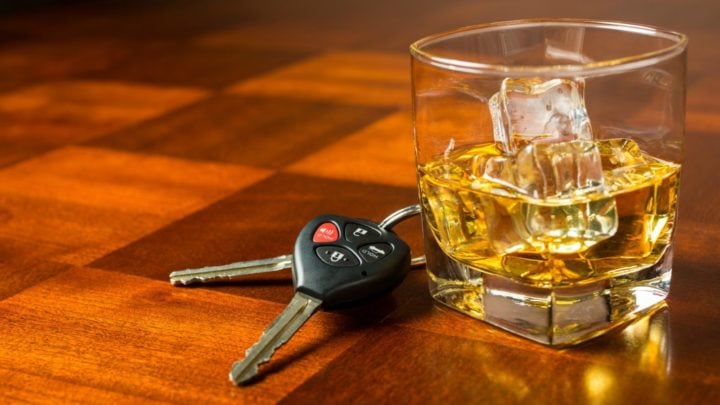 Drivers in NSW will receive an immediate loss of license if they are over the alcohol limit. Source: Getty

New South Wales has introduced tough new drink driving laws to tackle accidents and a rising death toll on the roads, with a zero tolerance rule for any range of drink-driving throughout the state.

As of Monday, any person caught driving over the alcohol or drug limit will have their licence immediately suspended and be ordered to pay a fine.

The new penalties – which were initially announced earlier this month – will see any driver found to be over the limit having their licence revoked for a period of three months and being made to pay $561 for the offence. The new law also applies for people caught drug-driving.

Speaking to press at the time, Transport and Roads Minister Andrew Constance highlighted the need to implement the rule to help save lives.

“As of May 20, if you are breathalysed with a low range offence, it is an immediate three month suspension of your license and a $561 fine,” he announced.

“I think the fact that 56 per cent of people are receiving a non-conviction, no fine, no loss of licence, that’s absurd.”

In the biggest change since the introduction of a blood-alcohol limit of 0.05, if you're caught drink driving, you will lose your license immediately. @lachlan_kennedy pic.twitter.com/4ImUU659oP

According to news.com.au, drink drivers previously had to attend court where the extent of the penalty would be considered. Low-range drink drivers didn’t lose their licence immediately and were still allowed to drive until they appeared in court in relation to the offence.

Speaking to the publication about the introduction of the new law, Assistant Police Commissioner Michael Corby said there are “no more excuses” for intoxicated drivers.

“Alcohol is one of the major factors in crashes that kill or injure people on NSW roads,” he told news.com.au. “The 0.05 blood alcohol limit has been in place for almost 38 years. There are no more excuses.”

Shockingly, a report published by the NSW Government revealed a total of 68 people died on NSW roads last year alone in alcohol related incidents. This accounts for nearly one in five road deaths.

One of those who died in a road crash was Home and Away star Jessica Falkholt, her parents Vivian and Lars and sister Annabelle, after their car collided with one driven by a man who had allegedly just left a drug clinic.

The four were killed on Boxing Day 2017 in the deadly crash on the Princess Highway in NSW. Jessica’s parents died at the scene, while her sister Annabelle passed away a few days later from her severe injuries. She was in Sydney’s Liverpool hospital at the time of her death and had her life support switched off.

Meanwhile, Jessica continued to fight for her life for several weeks in hospital, but tragically lost her battle in January, surrounded by her friends and extended family.

Since that fateful day family member Daniella Dare has spoken openly about the need to be careful on the roads. Earlier this month she joined Constance to share an important message about road safety.

Before you get behind the wheel, consider how a poor decision could impact lives forever.

Last night @PaulTooleMP and I were joined by Daniella Dare, who lost her cousins the Falkholt family to a crash on Boxing Day in 2017 – to spread a very important message about road safety. pic.twitter.com/DIzoKDpM8w

“Our family have been devastated by what happened with us losing the Falkholt family and through this I’ve met other families of victims that have gone through the same thing,” she said.

Read more: ‘So unfair’: Couple who tried to save Falkholt family haunted by painful memories

“I think the same message resonates with it – it doesn’t matter what the offence is, whether it’s drunk driving, drug driving, fatigue or on your mobile phone.

“But it’s the same effect – it’s always got the same outcome which is absolute devastating to families and lives are changed forever.”

What are your thoughts on the new laws? Do you think they are a good idea?